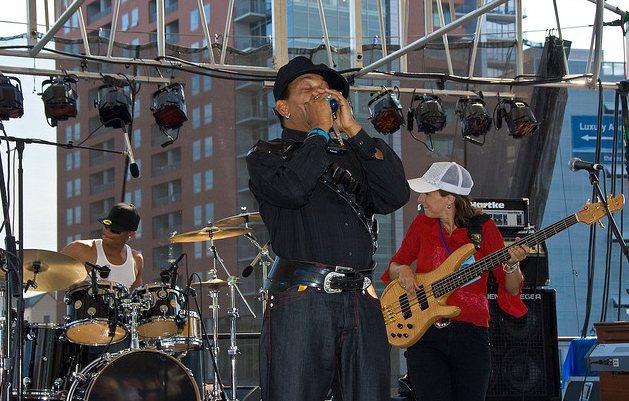 6:45 am on Friday September 9, 2011 | Posted by
Street music on Port Royal's Paris Avenue picks back up this Saturday

Update September 9: The weather's turned lovely (forecast for Saturday is 88 and sunny) and street muisc is back this Saturday.

Here's who's on tap

﻿Saturday ~ September 10th at 6 p.m. ~ Elise Witt ~ Global, Local & Handmade Songs: Georgia-based Elise Witt sings her Global, Local & Handmade Songs in a dozen languages, including sign. Elise has been a cultural ambassador to South Africa, China, Italy, Nicaragua, and Switzerland, and she has criscrossed the United States from New York's Carnegie Hall to Minneapolis' Gingko Coffeehouse to Nashville's Bluebird Cafe to the Kennedy Center's 25th Anniversary Celebration. During her performance in Port Royal, she will be joined by students from Lady's Island Elementary School, after spending classtime together crafting a new anthem for their arts-infused school.

This performance is funded, in part by a grant from South Arts in Partnership with National Endowment for the Arts and the South Carolina Arts Commission. In addition, funding was provided by AlternateROOTS.

Saturday ~ September 24th at 6:00pm ~ Boulder Acoustic Society: Boulder Acoustic Society's music is haunted by the past and focused on the future. It's indie-folk that draws from Appalachian roots, gritty gospel and the contemporary urban soundscape. BAS's mission to merge tradition with innovation produces a unique sound and an unforgettable live entertainment experience. "Punchline," the band's current release on Austin's Nine Mile Records has been hailed at home and abroad for forging "a new wave of American roots music."

﻿Saturday ~ August 13th at 6:00pm ~ Sugar Blue, A True Harp Hero: Considered to be one of "the foremost harmonica players of our time" by Rolling Stone, this Grammy Award-winning harmonica virtuoso is not your typical bluesman. Sugar Blue bends, shakes, spills flurries of notes with simultaneous precision and abandon, combining dazzling technique with smoldering expressiveness and gives off enough energy to light up several city square blocks and he sings too.

﻿Saturday ~ August 27th at 6:00pm ~ Lost In Holland: "An awesome fusion of sound...Josh's brilliant folk twinged guitar runs being complemented by Michael's wonderful, soaring cello." - Scott Sandie, Broken Arrow Magazine. Iraq war veteran Josh Hisle pairs with Michael Ronstadt (of the music dynasty family) to create the sounds and lyrics of undeniable depth (as commented by Neil Young at Sundance.) Michael's extreme cello style and extensive knowledge of songwriting and performance bring a blazing fire of skill, emotion and delivery that will leave you amazed, among other things. This duo, this revolution, is nothing short of brilliance.

For more information head on over to the ARTworks website.﻿﻿