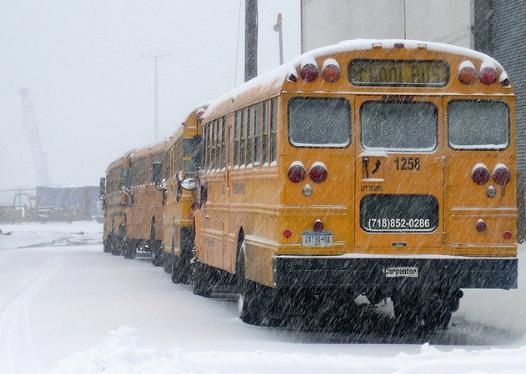 Update January 10, 6:30 p.m.: Beaufort County schools will once again be delayed on Tuesday for two hours.

The Technical College of the Lowcountry will also delay opening until 10 a.m. for all students and employees at all campus locations.

Update January 10, 4:15 p.m.: WSAV is reporting that the Jasper County School District already has announced a three-hour delay to the start of school Tuesday.

No such word out of Beaufort County, which hasn't offered a new update since calling off after-school activities early Monday afternoon.

Also of note is that in what might be one of Gov. Sanford's final acts in office, he has declared a State of Emergency for the Palmetto State. Surely this is due to what's being experienced in the Midlands and Upstate and not the rain we're getting down here.

On Tuesday more rain is expected in the morning and early afternoon but no freezing rain. However just north of us in Charleston, where Monday's storm was much worse, a few hours of freezing rain are expected on Tuesday morning.

Update January 10, 6:50 a.m.: So far much of Beaufort County has avoided precipitation as it's slipped through a pocket in the storm, and the longer it takes the more likely we are to miss the freezing rain window.

You can see the latest radar loop here of the storm over here, and the S.C. DOT has a webpage with the latest road conditions in the county. So far all is clear on Beaufort County roads while Jasper County roads are being reported as wet.

All of the closures are as we reported them late last night, with the addition of the Technical College of the Lowcountry closing all of its campuses today. Also, USCB has gone from a delay to a full closure today.

The Beaufort County School District has yet to post its promised 5 a.m. update. Check back at the school district's website and its Facebook page for that.

Updated 10 p.m.: Figured it best to put these closings in a little easier format for you.

Here's the statement on the Beaufort County School District website:

Although accumulation is not expected, Beaufort County Schools will open two hours later on Monday, January 10.  Students who ride buses will be picked up two hours later than normal schedule.Another weather update will be posted at 5 a. m. Monday morning.

WSAV also is reporting all S.C. state offices will be closed tomorrow.

Reported January 9: Another wintry mess is expected to leave snow, ice and freezing rain across the Southeast and Lowcountry, and some area schools already have announced school closings for Monday morning.

So far all we're seeing in terms of closings in Beaufort and Jasper counties are for private schools.

WTOC is reporting that Thomas Heyward Academy, Step of Faith Christian Academy and Abundant Life Academy in Jasper County will be closed tomorrow.

Nothing out of Beaufort and Jasper county public schools, they'll likely wait until bright and early to announce something.

103.1 The Drive also is reporting on its Facebook page that all non-essential personnel out at Parris Island are instructed to report in at 10 a.m.

The National Weather Service has issues a winter weather advisory for most of the region beginning at 4 a.m. Monday, which means ice and snow in some areas can be expected. So be careful if you're headed out early.