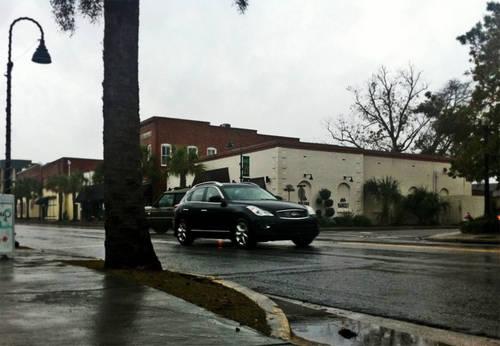 A file shot of the intersection.

The Island Packet has an update.

The update includes the names of all three involved - the Lady's Island couple injured and the truck driver.

You can give the article a read here.

Reported January 30: On Saturday night two pedestrians were struck by a truck while trying to cross in downtown Beaufort near the intersection of Carteret and Port Republic streets.

The intersection has marked crosswalks and a speed limit of 25 MPH. The incident is still under investigation and no charges appear to have yet been filed.

Check out The Island Packet's report on the matter here.

The area also has a lot of late-night bar traffic that seems to move between Wren and Breakwater. The big question that remains is, "Were the pair crossing at the crosswalk?"

On a personal note I've long thought the cross-section needs pedestrian and vehicular improvements. While I can appreciate that the city is probably loathe to add anything to the intersection that would furtherer reduce traffic capacity of the stretch that's often congested thanks to the opening of the Woods Memorial Bridge, if you spend some time on this blossoming part of Carteret, you'll realize it has far more in common with the cross-street pedestrian volume of Bay Street than Boundary Street.

And if you've ever tried to cross there, you know you'll need to be halfway through the crosswalk before anyone even considers slowing down  -- driver frustration seems to fuel them to make the next light and possibly the bridge before it opens.

Also worth a mention is that the city is currently upgrading and discussing the light at the intersection at Bay and Carteret streets.