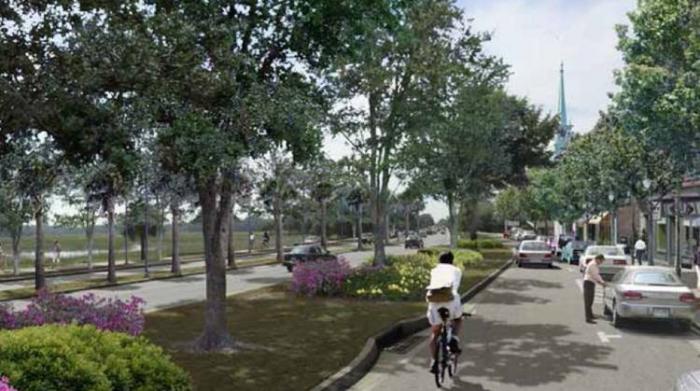 2:17 am on Wednesday December 14, 2011
Boundary Street improvements coming with $26.3 million in federal and local dollars

A rendering of how a section of Boundary Street could look after redevelopment is completed.

A newly-announced $12.6 million federal grant will jumpstart Beaufort's Boundary Street Master Plan with major roadway improvements at the intersection of highways SC 170 and US 21 and kick-off long awaited changes to one of the area's primary retail centers, Beaufort leaders said.

The goal: Build a better Beaufort through strategic investment in Boundary Street that will create a more scenic entry to the city, provide better commercial and retail locations, improve traffic conditions and make it possible to better utilize privately-owned adjoining properties.

About $13.7 million in local money from the voter-approved penny sales tax originally designated for Beaufort road projects will serve as match funding for the federal grant, officials said.

The city first made mention of renewed movement on the Boundary Street plan in November, and the area has long been targeted for conversion from a four-lane through road to a long shopping district from Uptown, past Beaufort Town Center, to the Beaufort Plaza shopping center, and including the old rail road trestle over the Battery Creek marsh (you can see a map of the propsed area below).

Early phases of the project, including realigning the intersection of SC 170 and US 21, will start within months, and most of the heavy work could be completed within three years. The federal grant announced Monday afternoon will cover the intersection improvements, purchase of rights of way and the start of work to reshape key strip shopping centers.

"In this economic environment, receiving more than $12 million in federal Department of Transportation funds for our project is huge," Beaufort Mayor Billy Keyserling said. "This is the injection of capital we needed to get this major retrofit moving and lay the groundwork for more business and residential opportunities along the important Boundary Street gateway.

"We appreciate the strong support from Senator Lindsey Graham and his capable staff for their support in making this grant possible. We also appreciate the huge investment of time and energy by the Beaufort Redevelopment Commission, and its Office of Civic Investment which researched and wrote our grant application. It was a stellar collaboration by all," Keyserling said.

"We're putting our long-range plans into action to build a better Beaufort in our fourth century. We are confident this is one plan that will not linger on a shelf gathering dust," Keyserling said.

The Boundary Street Redevelopment project is part of a larger effort to reconfigure Beaufort from near the Marine Corps Air Station to annexed areas of Lady's Island, creating unified and connected neighborhoods designed for people and not just for cars.

"Even in this down economy, we're seeing good investment in the City. We have new businesses opening, new homes being built and a renewed sense of opportunity," Dadson said. "When you add in this federal grant and the five-to-one economic impact of the Boundary Street project, we are poised for great things."

Since 2009, Beaufort issued 51 new business licenses within the Boundary Street corridor, including 25 new licenses in 2011. Of the $25 million in private investment along Boundary Street, $9 million has occurred in the past three years with 391building permits issued in 2009, 2010 and 2011.

At the same time, public investment in projects such as the City Hall and Municipal Courts complex anchor the Boundary Street Redevelopment corridor.

Beaufort City Council adopted the Boundary Street Master Plan in 2006. Since that time, work in progress and in the pipeline includes the partnership with Beaufort County, Beaufort-Jasper Water & Sewer Authority and private investors to convert the former railroad line into a rail-trail for walkers and bicyclists.

Other priorities have been to improve street crosswalks and accelerating the infill of Beaufort, including retrofitting the former City Hall into a fresh market grocery expected to open soon.

Throughout the redevelopment project is the intent to create commercial nodes along Boundary Street that can be safely reached by foot, bicycle, baby strollers, wheelchairs and vehicles. Designing shopping centers and retail shops only for vehicular access limits their potential for success, said Jon Verity, chairman of the Beaufort Redevelopment Commission.

"The Boundary Street Redevelopment District is the transformational project that will help re-shape the entrance to Beaufort for decades and create the best future for business and residential opportunities," Verity said.

The area included in the DOT grant is bound by Marsh Street to the east and Robert Smalls Parkway (SC 170) to the west, bordered on the north by the marshes of Albergotti Creek and on the south by Battery Creek. Boundary Street (US Highway 21) is the primary entrance to the City of Beaufort and the City's National Landmark Historic District. Beaufort City Hall and the County Government Center anchor the east end of the District while the Beaufort Plaza shopping center frames the west end.

The total cost to construct the Boundary Street Redevelopment District is estimated at $30,393,700. The federal DOT grant will fund almost half of that, with the city's portion of the Beaufort County One Percent Sales and Use Tax providing another $13.7 million.

Communities across the country are emphasizing the retrofit of their suburbs, said Craig Lewis from the Beaufort Redevelopment Commission's Office of Civic Investment. The "retrofit" is needed because of a growing market for multi-unit housing in the suburbs; continued growth in the percentage of jobs in suburban locations; rising gas prices making housing on the periphery less affordable; and local smart growth policies that limit sprawl and redirect growth to what's already built, he said.

Making the change locally involves using the form-based zoning codes, working with the S.C. Department of Transportation on road improvements, partnering with the Lowcountry Housing Trust to assist with housing revitalization, rehabbing existing buildings to new uses, and working alongside SCE&G to bury overhead lines.

Over the past year, Beaufort has seen building permits rebound to pre-2008 levels for both commercial and residential construction.

Since last spring, hundreds of Beaufort-area residents and business people have participated in charrettes led by the Beaufort Redevelopment Commission. Already, block-by-block studies are complete for downtown Beaufort and Ribaut Road. The remaining areas of the city will be studied during 2012 and will include additional public meetings for input.

The conversion of the former Port Royal Railroad line into a recreational trail ties into the Boundary Street project at Beaufort Plaza and provides alternate ways for people to reach destinations, Lewis said. The City is working with Beaufort County to complete the first section of the paved trail by next summer.