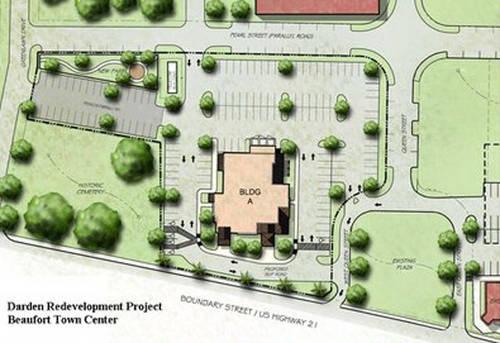 7:38 am on Wednesday January 12, 2011 | Posted by Ken Hawkins
Olive Garden proposal given thumbs down (update: sent to workshop)

Much of the debate focused along a proposed "slip road" at the front of the building along Boundary Street.

303 Associates pitched a clearer message and City Council, while not approving the plan, seemed to recognize the need for development and find a way to reconcile the city's needs with the developers.

In the end council decided to send the project to a public council workshop on Tuesday, January 18, to try and hash through the issues.

For more reading I'll point you to another short report: this one at The Island Packet.

The meeting time has yet to be announced, but it will likely be around 5 or 5:30 p.m. at City Hall.

First reporting, January 11, thumbs down: The conversation took the long way around at the Monday, January 10,  Beaufort-Port Royal Metropolitan Planning Commission meeting, but what finally came out was a stalemate between developers and city planners.

If you're just joining this thread, the back story is that local company 303 Associates is trying to get Darden Restaurants to build a $4.6 million project to house a Red Lobster and Olive Garden in its Beaufort Town Center Development.

The short story of last night's meeting is that eventually the commission recommended denial of the application; the commission's overall thinking being that structure does not work towards the city's pedestrian goals in the area. 303 Associates would argue otherwise.  That's the story in a nutshell; for the more complete story keep reading.

At the meeting, Beaufort Planning Director, Libby Anderson, started by recommending that the application be denied and called what 303 Associates was asking for an "improper application," and a "illegal" method. When 303 Associates spoke, they pitched it as a simple request for an extra 12 feet of setback (or 17 feet depending on how you hashed out the changes) that fit well within the city's vision for the Boundary Street corridor.

Early in the conversation, a representative for the company said, "All we have to do is show that it does not contradict the master plan. We're still trying to meet the city's goals."

That thinking would frame out the next 30 minutes of debate: The city would continue to press that a much debated "slip road" shown in a city drawing in front of the proposed building was never desired nor practical for the location due to a short length, and 303 Associates would frame the additional setback as a key to allow for present "360" degree vehicular movement around the building now and future pedestrian paths and secondary road growth in a way that would allow for sidewalks to be routed around the 16 Gate Cemetery instead of in front of it.

303 Associates also complained that they were being expected to build a structure to fully meet the Boundary Street Master Plan when the city, as 303 Associates CEO Dick Stewart said, has only built out "planted medians in front of city hall."

It was a position that earned the applicant some sympathy as vicechair Alan Dechovitz said, "I'm sympathetic to the gentleman's statement that we are not executing [the master plan.]"

It was about this time that it became clear that board chair Joe DeVito was getting ready to move on with what was already a several hour meeting, still Dechovitz continued on.

His most notable line of the night was: "Realistically Beaufort needs the business.  The last thing we want to do is push this away. I'm trying to save this thing."

Dechovitz then asked Anderson if the city architect could direct work with Darden to find something that meets the goals of both. This is the conversation that followed: