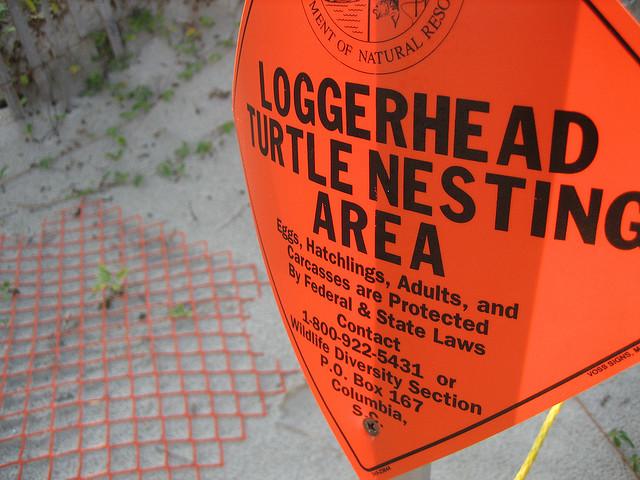 4:50 am on Saturday October 8, 2011 | Posted by Ken Hawkins
Endangered sea turtles have another good year in South Carolina

And in addition to seeing nesting by the loggerhead sea turtle, the S.C. Department of Natural Resources Marine Turtle Conservation Program reports having had one green sea turtle nest on Cape Island and four leatherback nests (three on Hilton Head Island and one on Hunting Island State Park).

Preliminary counts indicate that 50% of the nests (379) that were still incubating were lost. Because many nests hatched prior to the storm, approximately 9% of the total nests laid in 2011 were lost during this storm. The Cape Romain National Wildlife Refuge (CRNWR) was hit especially hard since it comprises 25% to 30% of the state's nesting effort.

However, some nests that were initially thought to be lost to the storm due to tidal inundation and sand accumulation have actually hatched, so the actual number of nests lost to Irene will not be known until all remaining nest sites have had the opportunity to hatch.

Survey effort at index nesting beaches in South Carolina from 1982 – 2011 did not vary among years. The natural trend includes high, medium and low years. Both 2010 and 2011 were good years. It remains to be seen as to whether or not the 2012 nesting season will follow this trend. Nesting prior to 1982 was much denser in South Carolina with over 2000 nests solely on Cape Island in the early 1970's. Currently, Cape Island has an average of 1,000 nests per year.

Although the genetic analysis is not complete, several interesting results have already emerged. Between June 11 and July 30, 2010, one female nested on Ossabaw Island, Georgia, then laid a nest on Kiawah Island, and then nested twice on Cape Lookout National Seashore, North Carolina. This female traveled great distances between nesting events, but another sea turtle currently holds the record for maximum recorded beaches visited in one season.

You can view totals by beach and year on the SeaTurtle.org website.