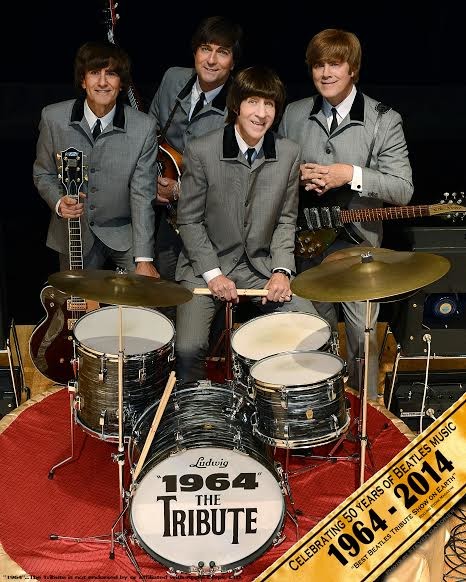 1964 The Tribute has performed at venues around the world including New York’s Carnegie Hall, where they have played to sold out audiences for 12 consecutive years and Denver’s famous Red Rocks amphitheater, playing to sell-out audiences for the last 10 years.

The late, great Dick Clark said, “1964 re-creates the Magic of The Beatles.”

Since the early 80′s, 1964: The Tribute has been thrilling audiences all over the globe with what Rolling Stone Magazine has called the “Best Beatles Tribute on Earth.”   If you love the Beatles, you won’t want to miss the most unique, fun and affordable concert event.

1964: The Tribute takes their audience on a musical journey to an era in rock history that will live in all of our hearts forever. This group is hailed by critics and fans alike as the most authentic and endearing Beatles tribute in the world.  Unlike other tribute groups, 1964 concentrates on the “touring years” of The Beatles.  Since that time period is one of the most documented of The Beatles, there is much that can be compared.  1964 has accomplished more than other acts could ever imagine, astonishingly accurate re-creation of the energy and magic of those touring years.  Over 20 years of research and performing have made 1964 The Tribute masters of their craft.

Mark Benson, co-founder of 1964 says, “1964 shows the audience what it was like to attend a Beatles concert in the early sixties and generates the same feeling of happiness that is still generated by the music of The Beatles. We get so much of this positive energy back from our audiences, it reassures us that for now, we are where we are supposed to be.”

According to Ben Hart of Aircadia Marketing, promoter of the show, “This is truly an event for the entire family.  We recently produced this show in Daytona Beach and Savannah and it surprised me because of the age diversity of the audience.  Everyone from Grandmothers to grandchildren were dancing in the aisles, singing along and interacting with the group.  It was an exciting evening.”

Allistair Taylor, former President of Apple Records said, “The resemblance was uncanny, it sent shivers down my spine. It was just like the boys. Never have I seen another group go to such detail.”