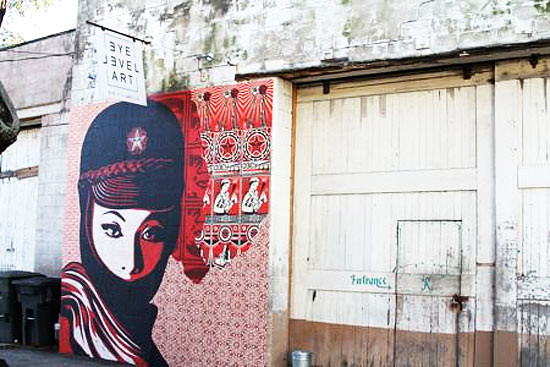 Image by Currie McCullough/53 Cannon The new Shepard Fairey on the facade of Eye Level Art.

Update January 10: The Post and Courier's Robert Behre reports that Fairey's new mural, which was never cleared by the city, has been cleared to stay.

The Eye Level Art building is not considered historic by Charleston City Architect and Preservation standards, and the mural on the external wall of the structure did not need to be cleared by the Board of Architectural review.

Here's a link to the update.

Update January 5, on Fairey: Cara Kelly caught up with Fairey for the Charleston City Paper while the street artist was working on this piece.

The result is a very lengthy chat about this particular piece, Fairey's roots in Charleston, his perspectives, and direction. A sort-of mini bio, if you will.

Get all the Fairey you can handle over here.

Update January 3, on murals: The Post and Courier's Robert Behre has spotted the piece and done a column.

Behre's main focus is on the legacy of murals in Charleston and how this sort-of public sign didn't get the city's requisite blessing.

First reporting December 23, 2010: Charleston native and controversial art icon Shepard Fairey has, for the first time in years, added a new one of his work to the streetscape of Charleston.

The latest installment has popped on the facade of 103 Spring Street, home of Eye Level Art.

Currie McCullough over at 53 Cannon has a number of nice shots of the new work. Meanwhile the Charleston City Paper caught up with Fairey and has a few words on the new piece and Fairey (but not much about how it came to be or why.)

And, if you're really feeling like a glutton, check out Eye Level Art's 173 photos of the before, after, and everything in between.