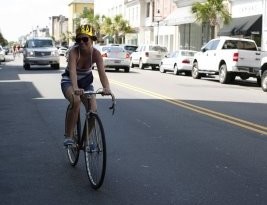 Image by Zach ThomasImage by alleycat2.JPG Check out all the shots from the ride.

This year’s Bike Month was a success with its wide variety of events that covered everything from children’s rides to documentaries but the Suicide King Alleycat hosted on the last weekend of the month brought in bikers from across the Southeast. Over forty riders, some from as far as Atlanta, Augusta and Columbia, participated in three days of events including a midnight mystery ride (MMR), trick competition, and the Alleycat itself.

Read more stories on this subject in our bike topic page.The midnight mystery ride kicked off the weekend with its laid back pace and simple requirements: “Bring your bike. Bring a friend. Bring something to share.” The group met at Marion Square and made their way through town with lights flashing and music playing all the way to Hampton Park for a few hours of laid back bicycle socializing.  For those that missed this MMR, there are more to come from the Holy City Bike Co-op this summer.

The following night everyone headed over to the Recovery Room to get registered and then over to the Aquarium for a bike trick competition. Experienced and new bikers alike competed for furthest skid, best trick, fastest sprint, and longest track stand, showing off their skills and their bikes.   Sunday afternoon was the finale of the event, with the Suicide King Alleycat. For those of you that are not familiar with Alleycat’s, check out Wikipedia: http://en.wikipedia.org/wiki/Alleycat_races

For this particular event, the bikers received three total manifests which gave them clues to their checkpoints. They had to get their manifest signed at a variety of checkpoints ranging from Queen Street Grocery to Magnolia Cemetery and had to perform tricks or in the case of my checkpoint, get their picture taken. Although each biker’s route was different the course came out to be about 40 miles, with the fastest time at two hours and five minutes and the slowest over three hours.

The entire series of events were heavily sponsored and prizes included biking gear from Chrome, Egrem clothing, and Urban Velo. They even managed to get Author Daniel Quinn chip in! Regardless of who won or lost, the Hampton Park finale included a slip-n-slide, water balloons, and cold beverages for all.   For information on getting involved in biking, check out www.holycitybikecoop.org or www.charlestonmoves.org