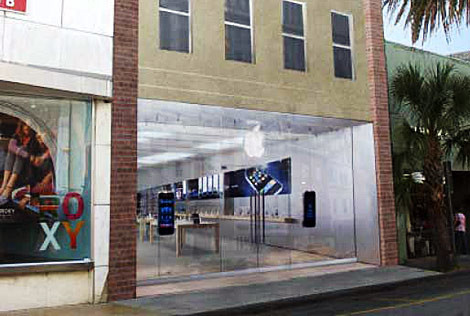 Image by AppleImage by 20070714applestore.jpg A rendering of the not-yet-finished Apple Retail Store at 301 King Street.

With all the iPhone hubbub we thought we'd update you on what will soon be the only Apple store in South Carolina. Though the company is keeping mum, it looks like the store should be completed next month, with Internet gossip pointing to the glass front being installed and the inside wrapping up for an August opening.

It will be nice to have to have a place to take a break from the August heat and check e-mail while walking down King Street. Get your Apple store voyeur shots at ifoAppleStore.com.

The store is taking over the now-closed Cumberland's music venue and grill at 301 King St. You can see renderings of the final look and photos of the old exterior in the plans submitted to the city.

Oh, and take that Savannah, we're your closest Apple store by about 32 miles. But we should enjoy our S.C. exclusivity while we can, as a Greenville store is set to open in fall 2009.