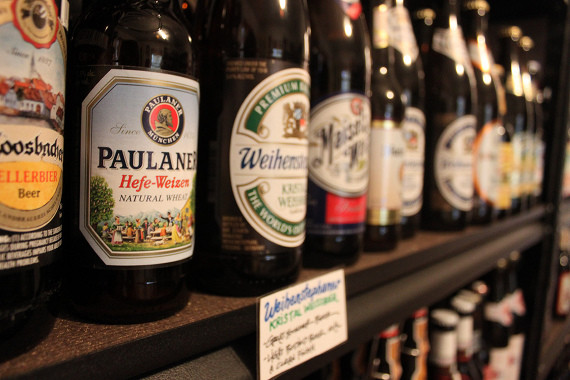 When you think about Mount Pleasant, you don't usually think of a house chock full of craft beers, a cigar lounge, or the ultimate backyard hang out space. Well, think again, because one new business has combined all three -- the House of Brews.

House of Brews is located at 1537-C Ben Sawyer Boulevard, just before you hit the Ben Sawyer Bridge. It's a quick turn off, and don't be alarmed when you find yourself traveling down a very long, cracked driveway. You'll know you're in the right place when you see the bright red letters and arrow directing you to the "Beer Haus."

My first impression: "Holy crap, it really is a house!" No joke, other than the seemingly out-of-place industrial sized ice chest on the side of the joint, you'd think a family was about to come outside and greet you. Once inside, however, you quickly realize this isn't your average home. It's the way cooler version stocked with craft beers from around the globe, cigars, a wall of tea, coffees and more. Open since the end of June, House of Brews has been working for the past three months to make a name for itself as the ultimate chill space. The owner, Rob Davis, is a very personable, laid back guy who greets you as you walk in the door. Feeling welcomed already, the fact that the inside is still laid out just like a house made me chuckle and want to explore. And explore I did.

You first notice the "foyer" which has a couch, glass wear and locally made pottery by sculptor Susan C. Gregory on display (and for sale). You then walk into the largest room of the house which boasts four rotating hard-to-find beers on draft, a wall of tea, a rack of chips to snack on and a display full of cigars. Just beyond the main room is a sitting area with bar stools and an adorable little checkers table. The gold, however, is awaiting you in the guest bedrooms. Labeled "New World" and "Old World," both bedrooms are full of beers. In fact, House of Brews keeps around 340 types of beer in stock at all times. Those 340 or so beers are stacked from floor to ceiling, and if you're a beer enthusiast, prepare to get giddy. Once you make your beer selection, you can either bring it home with you or drink it on-site. In addition to the indoor seating, House of Brews boasts an enormous back yard with tables made from recycled doors, a host of adirondack chairs, a stage for Friday and Saturday's open-mic nights and an entire sectioned off "smoking lounge."