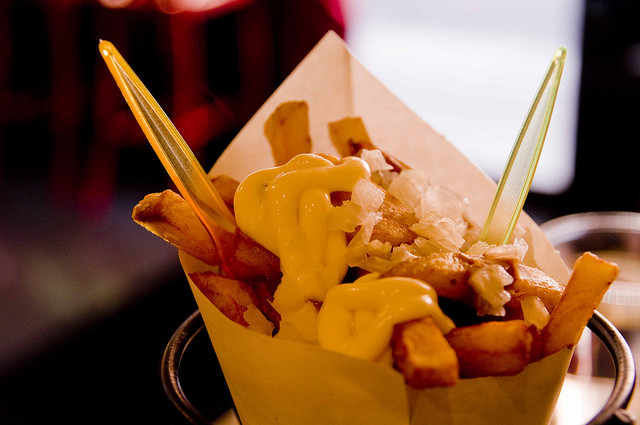 Word on Patat Spot's Facebook page is that the owners are looking for a new spot, so keep your fingers crossed! A Manny's Mediterrenean Grille will be moving in to the Patat Spot's George Street location.

The Dutch street-food style fry and falafel dishing Patat Spot Friet & Falafel has been open for nearly a month and a half now and we've heard surprisingly little about them since.

And no thanks to myself I might add, I've been sitting on a pile of photos I've had since opening day.

Well, Rob Young was the first to electronic press (that I've seen) with a review and his thoughts largely mirror my own, so I won't waste any electrons I needn't use.

In a nutshell: Well worth trying, though I suspect it'll take a couple visits to really get a feel for what you're into and what you're not. And I still need to try out a cone of friets at 3 a.m. after a few beers.

Oh, and here's a bunch of those photos that I mentioned before:

The "oliebollen," a sort of more bread like Dutch donut.