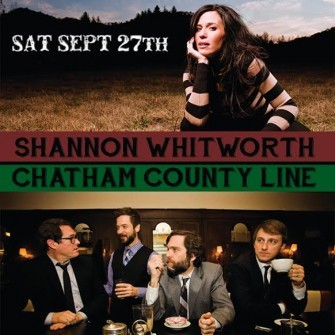 If Shannon Whitworth’s first two albums were cross-country treks, High Tide is a trans-Atlantic voyage. Leaving all preconceptions of the banjo-wielding  songstress behind, Whitworth’s new adventure steers into waters both familiar and refreshingly new, Gibson SG in hand. On the heels of a year spent touring with Chris Isaak and the Tedeschi-Trucks Band, and recording as the singing voice of Belk department stores’ latest campaign, High Tide finds Whitworth collaborating with Bill Reynolds (Band of Horses) and producer Seth Kauffman, while continuing to hit the road with her core quartet. From the first rolling rhythms, it’s evident that this album charts new waters. Just as her music stems from Appalachian roots (she’s a favorite at MerleFest) but sheds its traditional skin at the door, High Tide begins with a journey to the coast that takes rest stops in reverb-drenched jazz and indie rock along the way, setting the mood for a tight but playful expedition. Whether you’re holed up in a chilly Appalachian barn or walking the coast on a hot August evening, Whitworth’s High Tide holds universal appeal, from the mountains to the sea.

Entering their second decade as an ensemble, Chatham County Line bring a deep reverence for traditional American roots music and timeless bluegrass instrumentation to insightful, poetic original songs that are powerfully contemporary yet rich with the complex resonance of their southern heritage. Over the course of six studio albums and performances around the world, they have pursued a singular style that is entirely their own, yet connects with audiences from all walks. Dynamic and captivating, Chatham County Line are equally capable of classically hard-driving bluegrass and sparse, haunting ballads. The key to their sound lays in the close collaboration of the band’s four members: Dave Wilson (guitar), John Teer (mandolin, fiddle), Chandler Holt (banjo), and Greg Readling (bass). This partnership enriches their latest album Tightrope (Yep Roc), which was forged over a year’s worth of intensive rehearsals where they put every element under the microscope. “At the end of the day,” explains Wilson, “you want to write songs that have a reason for existing. For Tightrope, there was a lot of scrutinizing. We wanted every song to make the future Greatest Hits.” In person, the band is a marvel of rugged soulfulness, veering from winningly loose to thrillingly tight. It’s readily apparent that these four men share a profound friendship, and love what they do. “With this band,” Wilson says, “you can’t just rotate a guy out and replace him. It’s something larger than that. It’s a big train we’re riding on, and everybody’s enjoying the ride.