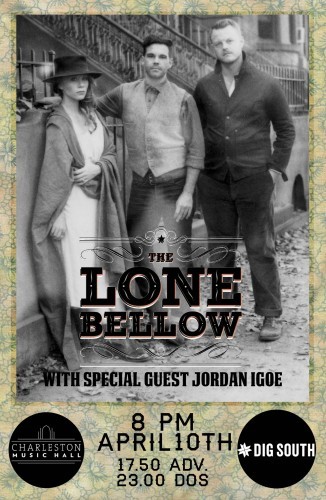 The Lone Bellow's self-titled debut disc is exuberant in its playing, welcoming in its attitude. Though the lyrics have a melancholic undercurrent, the tracks are more often rave-ups than ruminations, with swelling three-part harmonies and rousing group-sung choruses, especially on the electric guitar-driven “The One You Should’ve Let Go” and “Green Eyes and A Heart of Gold,” a we-will-survive anthem that could be about a family or a band. Indeed, there is a strong familial feel to The Lone Bellow, a recurring theme of inclusiveness. Teaming up with Dig South, the Charleston Music Hall is the perfect venue to showcase the intimacy and connection expressed throughout The Lone Bellow's first album.

Jordan Igoe holds a sweet spot in our hearts. Born and raised in Charleston, SC, Jordan Igoe is a singer-songwriter, whose songs are as Southern and soulful as she is. The multi-instrumentalist has been playing professionally for over ten years as a solo performer, and with a rotating lineup of stellar backup musicians around Charleston and regionally in the Southeast. Having grown up in a musical family, Igoe taught herself how to play the piano at age 10 and picked up the guitar a few years later, and writes catchy, heartfelt songs with both instruments. It is her raw, soulful voice, however, that immediately grabs the listener and holds on. On February 14th, 2014, Igoe released her debut album entitled, "How to Love."