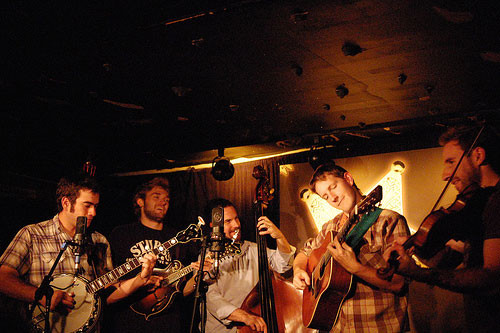 Image by Flickr user Kenf225Image by punch.jpg The Punch Brothers. The Charleston City Paper has some video of the event.

"So which one is the guy from Nickel Creek?" were common whispers heard throughout The Cistern Thursday night.

Get more coverage in our Spoleto special section. The show was forced to start fifteen minutes late and while people got situated in their seats, the curator of the event exclaimed that the music had some "delicate pieces" and asked the audience to please refrain from clanking bottles and other noisy activities.

I suspect about fifty percent or more of people who descended upon The Cistern were expecting a rollicking bluegrass show.  Lucky for me, I checked the band's Myspace site, and was prepared for what they coin as "American country-classical chamber music."

"The Punch Brothers" consist of a notable and highly talented ensemble.  Chris Thile, of Nickel Creek fame being the most recognizable. Thile is like the Jude Law of the bluegrass scene.  He looks like him, demands attention like him, and probably dated Sienna Miller at some point (take a look here.)

As if to apologize to some that enjoyed the forty minute suite less, the group launched into a fine version of The Band's "Ophelia."  Everyone was brought back around and the croakie and boat shoe wearing crowd finally had something they could sing to.  About two songs later, the band bowed and everyone got up and left.  But wait, have you not been to a concert before you fools? Of course there will be an encore! The band came back on stage and launched into "Packed Like Sardines in a Crushed Tin Box" by Radiohead.  This was to the delight of everyone who hadn't left yet, or rather about ten of those people who actually knew who Radiohead is.

One more song, and the band thanked Charleston and Spoleto again, and off they went, into the night ... or rather to Halls Chophouse for an impromptu "jam session."