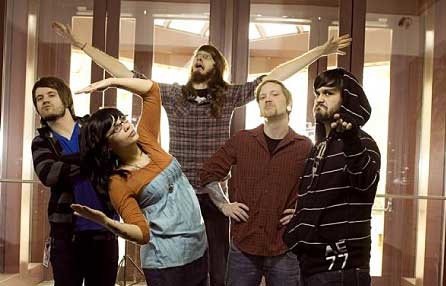 6:38 am on Sunday July 12, 2009 | Posted by
IwrestledABearOnce brings its crazed heavy metal to James Island

The heavy metal band iwrestledabearonce proved to be a blast live.

Read more stories on this subject in our music topic page.I did not expect to be hugged immediately upon entering the Oasis Bar and Grill on July 8th.

It had been raining all night, and because the Crosstown flooded, it had been a nightmare getting out to James Island.  I was wet, late, and grumpy.

But Stephen Bradley, the bearded and wiry lead guitarist of iwrestledabearonce gave me a hug anyway, and then I knew the night would be a good night.

I was also wrong in that I hadn’t expected much of a turnout because of the rain. At least a hundred people showed up to thrash around to iwrestledabearonce, but also to Aralic, Your Chance To Die, Mare of Steel, Coffin Syrup, and Belligerent.

Now, I’m not normally a heavy metal kind of guy.  But IWaBo caught my interest because they’re not just metal.  Underneath their harsh vocals and guitar riffs, there are elements of electronica, jazz, and just pure experimentation.  They were no different in concert, and they showed off what talented musicians and performers they are.

Their death metal licks would suddenly end, and the band would break down for a few moments and play something that sounded like Flamenco tinged Primus, or country blues, or even a Bjork jazz jam and then the metal would turn back on, harder than ever.

It was these little moments that made the band so great and so interesting.  They were in turn bloodthirsty and silly, making fun of their own bloodthirstiness.  IWaBo is a band that just wants to have fun, and doesn’t really want to be labeled.

But because they wanted to have fun, the crowd had fun.  A couple good mosh pits got going, but even when people got roughed up, it usually ended up in everyone hugging and laughing.

Rumor is, they may come back to the Oasis in October, so if you don’t have anything pressing planned, I would suggest going out to see them.  But prepare to have your face rocked of.