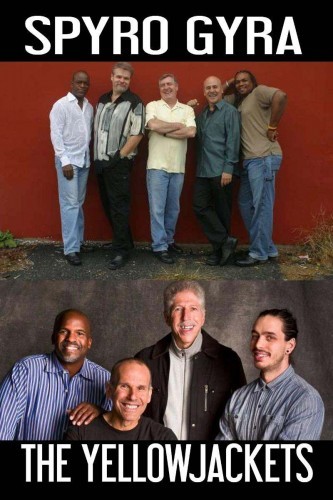 1:45 pm on Friday May 23, 2014 | Posted by ChasMusicHall
An Evening with Spyro Gyra and The Yellowjackets

Spyro Gyra is an American jazz-fusion band that was formed in the 1970s in Buffalo, New York. Their unique sound combines elements of R&B, funk and Pop music. As Spyro Gyra contemplates upcoming milestones to its storied career, it’s tempting to fall back on the Grateful Dead lyric, “What a long strange trip it’s been” to describe it. During that time, they have performed over five thousand shows, released twenty-nine albums (not counting “Best Of…” compilations) selling over ten million albums while also achieving one platinum and two gold albums. These upcoming milestones include 2012, which will be thirty-five years since their first album release and 2014 will be forty years as a band. They show little sign of wanting to slow down either, gaining Grammy® nominations for each of their last four albums.

Spyro Gyra’s is music whose core and desire was never for strictly commercial purposes. There was no calculated effort to sell millions of records, sell out concerts throughout the world, and inspire a whole new generation of musicians seeking an eclectic road of their own. When Beckenstein and Wall first started jamming back in Buffalo, they just did it because it was a blast, pure and simple. They made lyrical, jazzy music for a few folks at Jack Daniels, developed a high- energy live gig, one thing led to another, and suddenly, instrumental music was never quite the same.

The fun was suddenly not just theirs, but ours as well.

After twenty some odd years, when Jay Beckenstein takes a solo, then turns to his cohorts Julio Fernandez, Joel Rosenblatt, Scott Ambush and Tom Schuman as if to say, Are we having fun yet? Well, the answer has never been more obvious. Twenty years from now, when 40/40 is upon us, no doubt the sun of the “Morning Dance” will still be casting its rhythmic glow.”

In 1977, Robben Ford assembled a group of veteran session musicians to record his album The Inside Story. The trio of musicians, which included keyboardist Russell Ferrante, bassist Jimmy Haslip and drummer Ricky Lawson, soon discovered a certain “chemistry” and musical affinity that led to their formation of Yellowjackets. The Inside Story being mainly instrumental, Robben Ford’s record label wanted him to record another album that was more pop and vocal oriented. The group, known as the Robben Ford Group, preferred to pursue the instrumental route, and a “band within a band” was formed. This same group with Robben Ford on guitar recorded digital demos that were eventually accepted by Warner Brothers, and Yellowjackets was born. While Robben’s contributions would diminish over the years to being a guest artist, the group known as Yellowjackets would flourish.