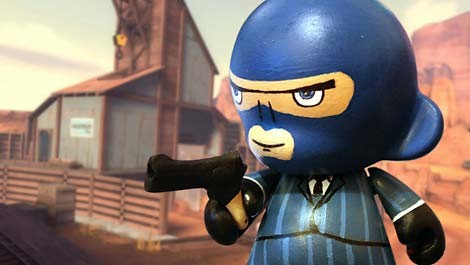 Image by Flickr user dandiemerImage by 20080820munny.jpg Not one of the ones up for bid, but it gives you an idea of what the customization is all about. View some of the Munnys up for bid.

Update August 23: We've got video coverage of how the event went. Read it here.

Ridiculously cute vinyl vinyl characters built atop by local and national artists are up for view at Redux. After that they're up for auction.

Kidrobot
An example transformation of a Munny blank.A press release from Redux elaborates on the background of the event:
B'zar and Redux are proud to present The Munny Show 2.0, an exhibition and auction of vinyl toys that are custom designed by local and national artists, as well as local businesses. ...

A promotional clip for the product.

All of the live auction proceeds from this event will go to support the free and local education and outreach initiatives of Redux Art Center. Local after-school programs that directly benefit from Redux's outreach programs include the Boys and Girls Club, the Cannon St. YMCA, and the Girl Scouts of America, among others.

The vinyl blanks run around $25.

View a bunch of photos from the exhibit over at Flickr. Or, go watch a video of a Munny being customized at YouTube.