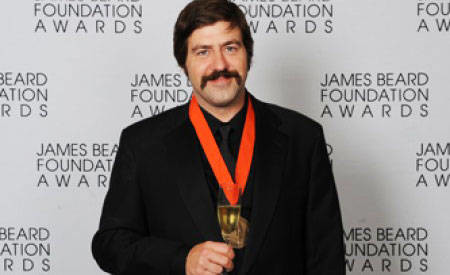 Image by Kent Miller/James Beard Foundation Lata already has a hot medal, will he add another?

Updates at the bottom.

Chef Mike Lata of FIG restaurant (and James Beard winner) is set to battle it out with Iron Chef Jose Garces on Sunday, December 5 at 10 p.m. on the Food Network.

In honor of the premiere, FIG is hosting a live viewing party at Taco Boy downtown, complete with festive food and drinks and an outdoor projection screen showing the episode. The event is free and open to the public and starts at 9 p.m. on December 5.

Chef Lata traveled to New York this summer to tape the battle against the newest Iron Chef, Jose Garces. The secret ingredient for “Garces vs. Lata” will be revealed at the beginning of the show, which serves as the kick-off to the Food Network’s holiday season.

Update December 2: Charleston Scene caught up with Lata and has a short question and answer piece about what it's like to be on Iron Chef and Lata's style on the show; take a read here.

Update December 6: Nearly 100 people came out to Taco Boy to watch Mike Lata battle it out on Iron Chef.

The episode will be shown again tonight, December 6th at 1 a.m. and again on December 9th at 9 p.m. on The Food Network. And don't forget that other local James Beard winner Sean Brock is on the show on December 12.