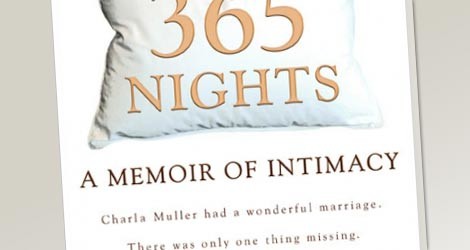 "In case you haven’t heard (and there’s a very, very good chance you haven’t), Charla wrote a sweet, G-rated, very modest book about doing the deed with her husband every day for a year. Crazy, huh? What the heck was she thinking?" writes Charla Muller about her book on her Web site.

Sounds like a fun, wacky book. The New York Times did a pretty extensive piece on Muller, saying in part:
LET’S say you and your spouse haven’t had sex in so long that you can’t remember the last time you did. Not the day. Not the month. Maybe not even the season. Would you look for gratification elsewhere? Would you file for divorce? Or would you turn to your mate and say, “Honey, you know, I’ve been thinking. Why don’t we do it for the next 365 days in a row?”

Thanks Upper King Street Charleston for tipping us off.