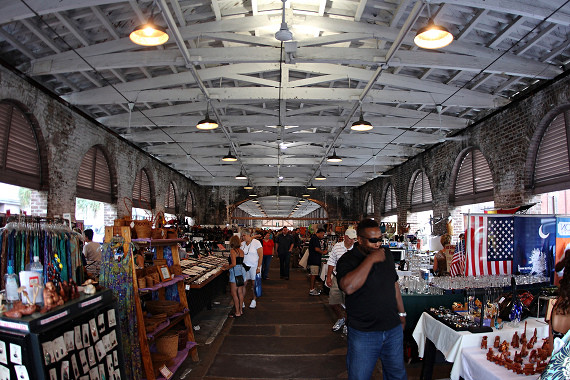 Update June 26: The Post and Courier﻿ has followed up on news that the $5.5 million restoration﻿ is all but done.

(Rennovation on the three other open air sections were complete in May 2010.)

But if you'd like a bit more depth on what's different in the indoor "Great Hall" portion of the Market, check out The Post and Courier﻿'s report.

Update June 23: The Historic Charleston City Market will celebrate the completion of a $5.5 million, two-phase restoration on June 26th, with the highly anticipated grand re-opening of the 18,300-square-foot Great Hall.

This marks the culmination of an 18-month construction project to revitalize the landmark, four-block long City Market facility that was first established in 1807 and remains Charleston’s number one free visitor attraction.

Composed of 20 small shops on both sides, the renovated building will also boast a skylight and two restaurants.

Live 5 News has the update as well as a photo from inside the final renovation site.

Update December 8: The last phase of renovations have begun on Charleston's City Market and are expected to be complete by spring time.

Construction crews are wrapping up with work on the 33,000-square-foot building that stretches from Meeting to Church streets that houses enclosed stores. And guess what - over 100 vendors are ready and rearing to take over the new storefront.

Head over to The Post and Courier for more on the ongoing renovations.

Update May 13, 2010: The $5 million renovations to spruce up downtown Charleston's City Market are halfway done.

The three open-air buildings where vendors sell all things Lowcountry and beyond are set to re-open in a week. The remaining renovations on the enclosed Market Hall are scheduled for October. The Post and Courier has the brief update.

Update October 13: The Post and Courier has a piece detailing the upcoming renovations the City Market is about to receive.

The Charleston Regional Business Journal has also added a write-up.

First reporting: Tomorrow, October 13, marks the date of the official press conference with Mayor Joe Riley and Principals of City Market Preservation Trust, LLC as they reveal the restoration plans and schedules for the historic City Market.

Here's what we know from the press release:

Mayor Joseph P. Riley, Jr. and City Market Preservation Trust, LLC announced plans to restore Charleston’s historic City Market. The restoration will begin in January 2010 and will be done in two phases. Phase 1 includes the restoration of the three open buildings between Church Street and East Bay Street. Phase 2 will be the renovation of the enclosed shops in the Market Hall Building, located between Meeting and Church Streets, and will begin later next year. Mayor Joseph P. Riley, Jr. said “The City Market has been a place of activity and vibrancy since its early beginnings in 1804, serving many different functions during the long history of our city. As one of the oldest public markets in the country, with the first covered spaces being built in 1841, it deserves a renovation which will allow it to remain an energetic meeting place and to expand its functions and vitality. We have confidence in the ability and experience of the City Market Preservation Trust, LLC to create a space in the 40,000 square feet of the Market that we will be proud of and that will be an attractive and lively space for businesses, visitors and especially, our residents.” The City Market consists of more than 40,000 square feet of prime retail space located between Meeting and East Bay Streets which is the epicenter of Charleston’s business and tourism district. It is managed by City Market Preservation Trust, LLC. CMPT took over the management of the City Market on October 1, 2008 after their successful presentation in response to the City of Charleston’s request for proposals to manage the Market. CMPT’s principals are Hank Holliday, Steve Varn and Laurie Thompson. All three have substantial experience in the renovation and redevelopment of historic buildings in downtown Charleston. Holliday and Varn have renovated and currently own and manage over 300,000 square feet of commercial space in the City Market, including the Planters Inn, Peninsula Grill, Hank’s Seafood Restaurant, the Doubletree Hotel, Hayne Street Inn, Mercato Italian Restaurant and the Andrew Pinckney Inn. Thompson is the former Revitalization Director for the City of Charleston and has been involved in numerous projects in the Central Business District including Charleston Place and Saks Fifth Avenue. Glenn Keyes is the architect for the project. Keyes has been in private architectural practice in Charleston since 1986. Projects of note include the Nathaniel Russell House, the historic Charleston County Courthouse, the William Aiken house and the current restoration and steeple addition to the Cathedral of St. John the Baptist. David O’Neil, a nationally known and respected public market consultant, is advising the project. O’Neil consults many of the leading public markets in the country and leads a quarterly seminar on public markets for the Project for Public Spaces in New York City. Phase 1 will restore the three open buildings between Church and East Bay Street which will be sequentially renovated beginning on January 4, 2010. The work is a complete facelift including brick repointing, roof repair and replacement, security cameras, the addition of a new set of restrooms, improved lighting and air circulation and other improvements. Phase 1 of the project will take approximately four months to complete. “The City Market is in desperate need of renovation and significant capital improvements,” said Holliday. “We are truly excited about the opportunity to renovate the City Market which we believe will substantially revitalize the entire City Market District and hopefully bring Charlestonians back to the Market.” “Our team has received a communitywide outpouring of support for the renovation of the City Market and it, along with the development of Union Pier will revitalize the entire City Market District,” said Varn, a former president of the Downtown Market Area Association. Barry Newton, the General Manager of the City Market, said “One of our primary goals is to maintain the business operations of the existing vendors during the pain of construction.” In order to achieve that goal, the City of Charleston has approved a plan to temporarily close South Market Street between Church and State Streets. Tents will be erected to accommodate the vendors as their building is restored. The City Market was established in 1804 as a public market on land donated by the Pinckney family. It is one of the oldest public markets in the country. The existing buildings were built in 1841 and now occupy over 40,000 square feet of covered space not including the Confederate Museum which on the second floor of the Market Hall Building at Meeting Street. There 265 active vendors on the City Market tenant list including 17 enclosed shops, 165 permanent vendors and 86 temporary vendors. It operates every day except Christmas and includes a Night Market all year long. The management company is planning to expand the Night Market when the restoration is completed. The cost of the improvements will be paid from a revenue bond that is supported by the income from the City Market. Riley will propose that City Council consider the revenue bond in November.