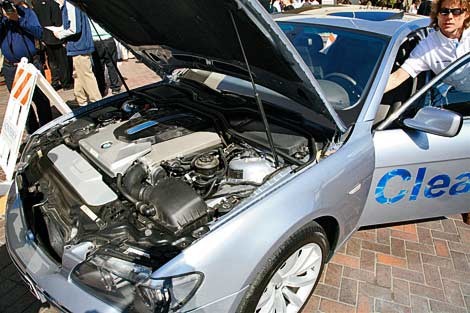 If you don't mind burning a little fossil fuel to get there, you could test-drive what could be the new cars of the future: Hydrogen fueled vehicles.

The Hydrogen Road Tour will be stopping off in South Carolina and allowing the public a chance to test drive some vehicles in Greenville and Columbia.

Here are the details of those two stops from a press release:
The Tour’s first stop in South Carolina will be in the Upstate at BMW Zentrum on Saturday August 16 from 10:30am – 12:30pm. The stop will provide the media, invited VIPs and the public with a unique experience where they will be able to take part in a public ride-and-drive on a closed course. Rep. Bob Inglis (R-SC) will be in attendance at the event where BMW will showcase the BMW Hydrogen 7, the world’s first luxury performance sedan with hydrogen drive.

The Tour’s second stop will be in Columbia at Midlands Technical College from 2 – 4pm when VIPs, media and the public will again be invited to get behind the wheel of a hydrogen-powered car. Midlands Technical College is home to the Fuel Cell Technician Program and recently received a $62,000 award from the Greater Columbia Fuel Cell Challenge to expand its fuel cell program. An educational area will be set up that will allow the public the opportunity to learn more about hydrogen technologies and the SCHFCA through educational displays, videos and literature.

But if you want more of a technical rundown of the tech head to Aiken:
Finally, the Tour will stop in Aiken at the Bridgestone Firestone plant from 5:30 – 7:00 pm and will refuel using Bridgestone’s hydrogen fueling station on-site, which supports their fleet of hydrogen fuel cell forklifts operating at the facility. The public will also be invited to learn more about the hydrogen fueling process and will be able to take a closer look under the hood of a hydrogen vehicle.

If you're interested in the news write-up about the tour read The Post and Courier's story. Also check our other coverage on hydrogen.