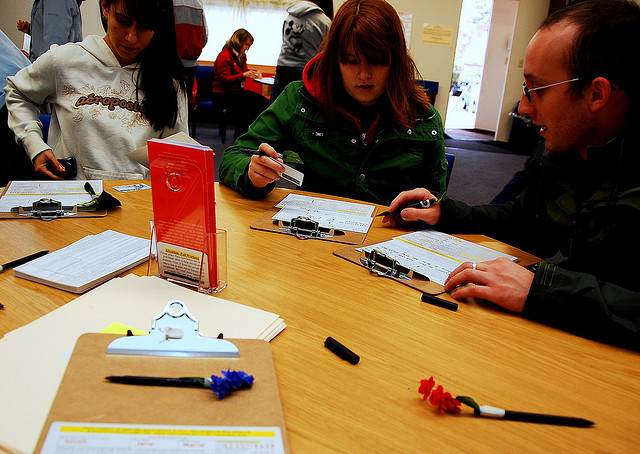 Today's the big voting day, and if you're scratching you're head as to some of the finer matters of voting, here's a not-so little guide from the S.C. Election Commission on what's what — edited for local brevity.

Take a read, it's full of some lesser known nuggets like no liquor buying today.

Q.  What candidates and/or offices are on the ballot today?
A.    The candidates and offices on a particular ballot will differ depending on the county and districts in which you reside; get the local lists here.

Q.   Where do I vote?
A.    At the polling place in your precinct. You can use this form to find out where your precinct to vote is.

Q.   Is the new Photo ID law in effect?
A.    No, the new photo ID rules are NOT in effect for any elections in 2012, including the November 6th General Election.  The rules for providing ID in the 2012 General Election are addressed in the next question.  To learn more about the new rules that begin on January 1, 2013, visit www.scvotes.org.

Q.   What do I need to take with me to the polls to vote?
A.  You will be required to show any one of the following items to vote:  Voter registration card*, Driver’s license, or ID card issued by the S.C. Department of Motor Vehicles.

*If you registered by mail and did not include identification with your application, and you are voting for the first time since registering; you will not be allowed to vote with only your voter registration card.  You will be asked to complete the voter registration process by providing one of the following IDs:  Either a valid photo ID such as a driver’s license or DMV-issued ID card; or a copy of a current utility bill, bank statement, paycheck or other government document that shows your name and address in the county.

Q.  How does straight party voting work?
A.  Whether to vote “Straight Party” is the first choice a voter must make on a General Election ballot.  Voting straight party is optional.  Each political party that has nominated a candidate appearing on the voter’s ballot is represented in the straight party selection area.  If a party is selected under straight party, every candidate of that party is automatically selected.  The voter then has the option of changing their vote for any particular office (also known as “crossover voting”) simply by touching the candidate of choice for that office.  Voters should also be aware that when voting straight party no selection is made for nonpartisan offices and questions.  These contests must be voted individually.  As always, voters should carefully review their choices on the review screen before casting their ballot.

Q.   I’ve moved since the last election and haven’t updated my voter registration card.  Can I still vote?

1.  The voter may vote at the polling place in his previous precinct using a failsafe ballot.
2.  The voter may go to the voter registration office in the county in which he currently resides, change his address, and vote there.

Q.   I saw a candidate/member of candidate’s campaign at my polling place talking to voters.  Can he do that?

A.    Yes, but there are restrictions:

-Within 200 feet of an entrance to a polling place:  Candidates and campaign staff may campaign as long as they are not intimidating voters or interfering with the election process.  However, no campaign literature, signs, or posters are allowed.  Candidates are allowed to wear a badge no larger than 4.25” x 4.25” featuring only the candidate’s name and office sought.  Candidates must remove their badge upon entering a polling place.

-Outside 200 feet of an entrance to a polling place:  does not fall under the jurisdiction of the poll clerk.

Q.   A candidate is definitely campaigning while in the polling place, or there is campaign literature within 200 feet of the entrance.  What can I do?
A.    Inform the poll clerk immediately.  If the issue is not resolved, contact the county election commission and inform them of the situation.  The election commission will address the complaint.

Q.   Can candidates or their representatives take people to the polls to vote?
A.    Yes.

Q.   Do employers have to give you time off to vote?
A.    No.  There is no state or federal law mandating that employers must give time off to employees to cast their vote.  Voters who know they will not be able to visit the polls on Election Day should apply to vote absentee before the day of the election.

Q.   Can alcoholic beverages be sold on Election Day?
A.    Yes, but not in liquor stores.  State law prohibits retail liquor sales on the day of the General Election.

Q.   Are there any laws about candidates posting their signs along the roadway?
A.    Yes, there are several state laws addressing political signs on roadways, as well as county and municipal ordinances.  See S.C. Code of Laws Sections 57-25-10, 57-25-140, and 7-25-210.  Ultimately, it is the responsibility of the entity that maintains the road (state, county, or municipality) to enforce applicable sign laws.

Q.   When I left the polls, I was asked to participate in an “exit poll.”  Is this legal?
A.    Exit polls are legal and participation is voluntary.  They are NOT conducted by the State Election Commission or the county election commissions.  Generally, polls may not be conducted inside the polling place, and we ask that voters not be approached before they have voted.  If a voter feels threatened or intimidated by a pollster, it should be reported immediately to the precinct’s poll clerk.

Q.  Where can I file a complaint about the election?
A.    Any complaints regarding the election can be addressed to your county election commission.