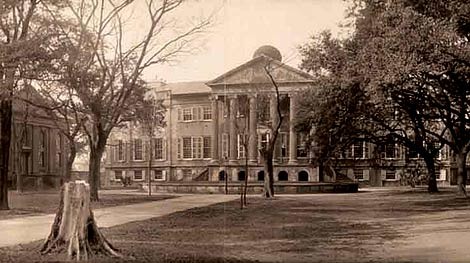 Image by Flickr user libraryimages.net Image by 20090212-randolph-hall.jpg Randolph Hall had far less foliage around it in 1909, but it still had a considerable amount. -- The Cistern is the concrete circle just in front of the building.

Update February 28: The verdict is in, and the ten trees will get the ax today, Saturday, February 28.

In an e-mail to the school Vice President for Facilities and Planning Monica Scott said:

This decision was not made lightly or easily, and it is made with the knowledge that there are members of our community who strongly disagree. To ensure that all concerns have been heard and considered, College staff conducted both public forums and private discussions with faculty and with student leadership. Although opinions about the necessity of removing the trees still differ, the College must ultimately rely on its expert project consultants, who have stated that the removal of these trees is a necessary part of the overall restoration and future preservation of Randolph Hall.

Head over to The George Street Observer for more on this latest development.

Update February 13, 9 p.m.: The George Street Observer has added their own video. It's quite well done, go check it out. -- You'll have to wait for the whole video to load before it will play.

Update February 13: The Post and Courier went by the rally and shares a story and video from the event. -- If you've been following along, you can probably skip the story.

Update February 12, evening: An open forum and public rally yielded a strong call for the college to open the decision making process on what should happen to the trees.

The situation is being touted by many as a great way for students to learn about government and democracy. I'd say the lesson is that openness and transparency are almost always good things.

There's no word on how many people turned up to the afternoon rally.

Head over to The George Street Observer for a write-up.

First reporting: After it was announced that several trees would be removed from the College of Charleston's historic Cistern area, a controversy immediately erupted.

The community's furor was as much from the planned action as it was from a lack of being included in the decision.

Today, February 12, that wave may be cresting as a rally will be held at noon.

A forwarded e-mail read:
Rally to Save Our Trees
Cistern
Thursday 12 noon
Please come and show your support for Campus Trees
Bring banners, signs and your enthusiasm
Please tell your students, colleagues, and friends

If you're new to the issue, a group of architects, engineers, landscapers, and historical preservationists recommended the tree removal as a way to slow deterioration of the historic Randolph Hall -- noting that trees can increase the amount of moisture the building is exposed to.

Detractors say there's no need to cut down the four magnolia trees, two palms, and four American hollies. They suggest the trees are not that much of a problem and can be thinned instead of being fully removed.

Meanwhile, The Post and Courier has put together an excellent opinion piece which points out that the college has been burned several times in the past when it comes to removing trees. The writer wisely suggests that the college community may well have responded better if they had been included in the process.

So, here's what to do:
If you want to see the tree's saved, go to the rally at noon at the Cistern on George Street.
If you don't know anything about the fuss, go read The George Street Observer's piece and watch their video.
And go check out The Post and Courier's column for some excellent history on the college's past PR problems when it comes to trees.
If you don't know anything about the college or the Cistern or Randolph Hall. Go here.