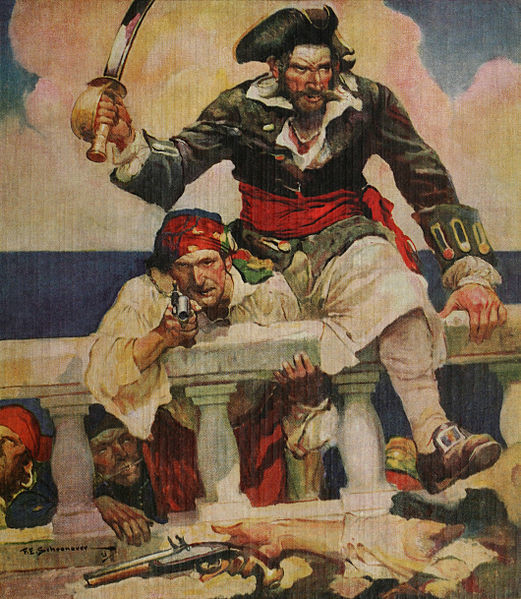 “A period’s history can probably best be told through the biography of one of its leading characters, be he a hero or villain.” Robert E. Lee, author of “Blackbeard the Pirate: A Reappraisal of His Life and Times”

Recent conversations with Ben Cherry, well known Blackbeard actor and performer, and a visit to the N. C. Maritime Museum’s Blackbeard exhibit in Beaufort, NC reminded us that Blackbeard’s legend lives. Most of what we know about him is through the 1724 writings of Captain Charles Johnson. Probably Blackbeard’s 1718  blockade of Charleston is one of his best known exploits but it was the beginning of his demise as South Carolina and Virginia began to worked together to end Blackbeard’s career in piracy.

Edward Teach or Thatch, aka, Blackbeard was probably born in Bristol, England. He began his career as a privateer in Queen Anne’s War in the Caribbean. Out of a job when the war ended, Blackbeard began to work under pirate Captain Hornigold. Eventually, he went out on his own and upgraded the captured ship, Concord, into his threatening 40 cannon Queen Anne’s Revenge.

With Blackbeard’s massive figure, crimson coat sporting pistols and swords and beard wild with fire from gunpowder wicks, many surrendered on the spot. Bold tactics and a willingness to take on British- man-of- war vessels, secured his formidable reputation.

With trade threatened, Britain sent in Woodes Rogers, new Governor to the Bahamas, giving Rogers guns and ships to fight piracy and authority to grant pardons in return for a promise to end pirate activities. Blackbeard declined a pardon and built his fleet to four ships with new partner, pirate Stede Bonnet. Blackbeard and Bonnet increasingly set sights on the American Colonies.

They hatched a plan to blockade Charles Towne (Charleston) Harbor in 1718. A weeks worth of pillage, plunder and holding captives in exchange for medical supplies, created a motivated enemy in Charles Towne governing circles. Meanwhile, in a plan to dump partner Bonnet who was off seeking pardon from North Carolina Governor Charles Eden, Blackbeard took all their treasure and gutted the Queen Anne’s Revenge, which was to be Bonnet’s new ship. Next he abandoned many fellow pirates on a remote island without giving them their share of treasure.   If there was honor among thieves and pirates, Blackbeard would have none of it.

Finally, taking advantage of the pardon offer, Blackbeard gained pardon himself from Governor Charles Eden, settled in Bathe Towne, North Carolina and married his fourteenth wife, 16 year old Mary Ormond. He shared his plunder with Governor Eden and with new political protection continued his piracy of merchant vessels. Blackbeard and his new ship, Adventure, became such a threat to colonial trade that Pennsylvania and Virginia issued orders for his arrest.

Governor Alexander Spotswood sent two ships from Hampton, Virginia in 1718 with orders to end Blackbeard’s piracy. Virginia and South Carolina were working together to end piracy so trade on the open seas could flourish. Lt. Robert Maynard was in charge. In the midst of battle, Blackbeard became over confident and boarded Maynard’s ship but Maynard had troops hidden below deck. Blackbeard was shot by Maynard and had twenty sword wounds before dying.

Blackbeard has inspired many myths. One popular belief is that he was a successful pirate.  By abandoning and double crossing fellow pirates and angering powerful figures in South Carolina and Virginia, he was in the end left with little protection and few men. It has, also, been said that Blackbeard rarely killed anyone and depended on terrorism and intimidation. The reality is cannons blasting across the decks of ships to gain control killed many innocent people.

Assumptions that Blackbeard raped women are false. Blackbeard reportedly was a ladies’ man who loved to court and married 14 wives often with ceremonies performed aboard ship by his first mate.  He was not a family man and many of his marriages were one night stands, according to Ben Cherry, Blackbeard actor and historian.

Another popular notion is that Blackbeard buried vast treasure. Most pirate treasure consisted of agricultural goods and products. They could not be buried and were sold at a discount price in port areas.

Whatever the truth, treasure seekers will continue to search for buried treasure. We wouldn’t object to digging up a bit of treasure ourselves.

Dr.  Gordon Mercer is past president and on the Board of Trustees of Pi Gamma Mu International Honor Society and professor emeritus at Western Carolina University. Marcia Gaines Mercer is a published author and columnist. They were married in Charleston and have a place in nearby Garden City.