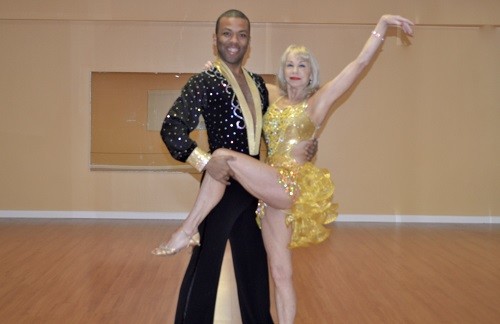 3:37 pm on Monday February 15, 2016 | Posted by HAF Creative
Local Celebrities Take to the Dance Floor to Honor Loved Ones, Raise Awareness for The ARK in Summerville

Local celebrities participating in the sixth annual Dancing with The ARK’s Stars on March 12 are learning new dance steps and raising money for a good cause. But for some of the dancers, this event is much more personal.

Greer Reagin of Reagin Orthodontics in Summerville, is dancing for her grandfather who suffered from dementia. "He made such an impact in my life that it influenced my education and career goals," said Reagin, who has a master's degree in public health with a certificate in gerontology from the University of South Carolina.

Nancy Deitch, a teacher at Rollings Middle School of the Arts, is putting on her dancing shoes for her father, who passed away in August after eight years of vascular dementia and Parkinson's disease.

“It impacted everyone who loved him and watched him lose so much of who he was and what he could do,” she said. “Because of this very sad and personal experience, I dance. I dance for my daddy and all like him.”

The 2016 celebrity dancers are:

Each dancer is paired with a professional dance partner from Elite Dance International Studio in Mount Pleasant. Couples will perform at the event for a chance to win one of two titles: the Judge’s Award or the People’s Choice Award voted on by the audience.

Similar to the hit TV show “Dancing with the Stars,” four couples will dance in each round, with the two couples receiving the most judges’ votes competing in a “dance off” to win the Mirror Ball trophy. The couple receiving the most votes by dollars wins the People’s Choice trophy. Votes are $10 each, and can be cast in advance at TheARKofSC.org or at the event. By mid-February, the dancers have raised more than $11,000.

Dancing with The ARK’s Stars, sponsored by Dorchester County Probate Judge Mary Blunt, is at 7 p.m. Saturday, March 12 at in the Eidson Gym at Pinewood Preparatory School, 1114 Orangeburg Road in Summerville. Tickets are $50 in advance and $60 at the door. Purchase tickets online at TheARKofSC.org or call 843-832-2357 for information.