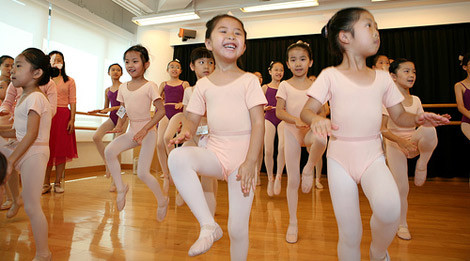 Image by Flickr user Tom@HKImage by 20080727ballet.jpg Do you want to be a ballerina when you grow up? The Charleston Ballet Theatre might be able to help.

The Charleston Ballet Theatre will be starting a dance school on James Island in September, and they've hired nationally renowned arts administrator Paul Kaine as interim executive director. The two moves mark major additions for the CBT, as The Post and Courier writes:

The school, which (co-artistic director Patricia) Cantwell says will feature a fully equipped studio for dance students of all ages and ability levels, will be in the James Island Shopping Center at Maybank Highway and Folly Road.

Cantwell says the school will offer a variety of classes, including ballet, tap, jazz and Broadway-style dance. Master classes with the Charleston Ballet Theatre company artists will be taught throughout the school year for intermediate and advanced students.

In other news, the CBT has hired Paul Kaine, a nationally recognized art administrator, as a consultant/interim executive director. Kaine will assume his new position Sept. 15.

The CBT's 2008-09 season starts in October. They're saying it's going to be a huge season, with such popular productions as "Camelot," "The Magical Mystery Tour," and "The Great Gatsby," as well as several others.

Meanwhile, the ballet is really seeking help in funding, as resident choreographer Jill Eathorne Bahr wrote in a recent editorial in the P&C. It's not just the CBT, she writes, but arts in general, across the Lowcountry, that need help. So this is our way of saying, if you're interested in the arts, maybe you should consider a donation.

You can find out more information from the Charleston Ballet Theatre — about tickets, lessons, or donations — at (843) 723-7334.