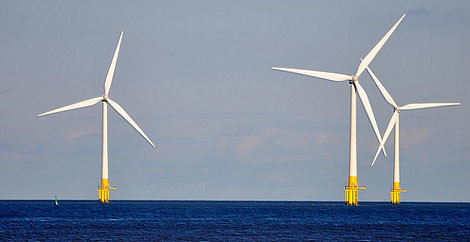 Image by Flickr user Martin Pettitt Big, mean wind turbines -- and also something S.C. is nowhere near ready to install yet.

Update October 20: After a yearlong wind study conducted by Santee Cooper, six buoys in the ocean from 1 1/2 miles to 12 miles off Myrtle Beach and Georgetown have proven that there is enough wind power to, "supply significant electric power at least part time."

This information was shared during the first of many wind-energy forums being put on by the Southern Alliance for Clean Energy with a federal grant.

The good news on the feasibility of clean energy comes just in time -- one week before  Clemson University begins construction on a $100 million wind-turbine test lab at the former Charleston Navy base.

The Post and Courier has a lengthy article on the announcement and what it could mean for the Lowcountry in the near future; read it here.

First reporting: As part education project and part getting the state's feet wet in alternative energy, Santee Cooper is installing a wind sensor in Georgetown.

Georgetown High School students studying environmental science will be charged with downloading data from the sensors over the next three to six months, helping analyze the data and offering their input as to whether the site will sustain a 1.8-kilowatt wind turbine that could be installed later in 2009.

1.8 kWh is roughly enough to run two medium sized window-unit air conditioners. The turbines Santee Cooper are exploring would go along coastal communities, but winds several miles offshore are generally stronger. Back in 2007, Clemson installed a test station in Charleston. Thanks to ABC News 4 for tipping us off.

Update November 16: The Charleston Regional Business Journal has an additional article on Santee Cooper's research into the possibility of erecting small-scale wind turbines in customer service territory. Check it out. Also note that the utility recently sponsored a study of what the turbines would look like off the South Carolina coast.