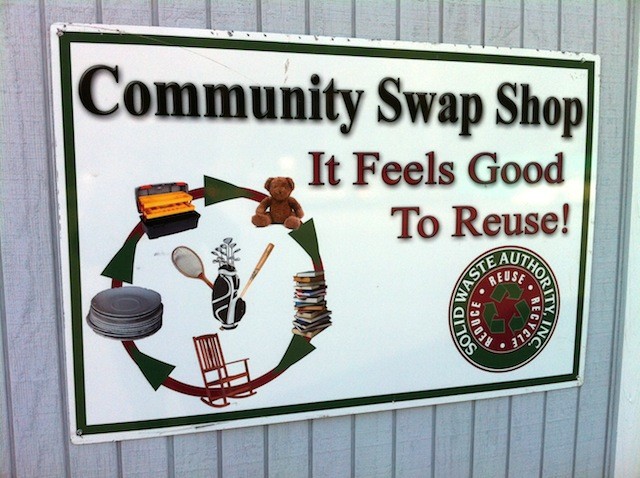 Update March 11, 2011: Wrapping up its first quarter in operation, The Store has no shortage of customers.

The Sun News write-up has more details on the cost of opening the store and when they expect it to break even. More details are here.

Update December 12, 2011: The Store resale outlet will have a grand opening event this Wednesday, December 14 at 10 a.m.

Attendees will be encouraged to tour the new facility as well as make purchases from The Store. The Solid Waste Authority and the Horry County Council on Aging says that The Store is providing a way to save money and protect the environment, while providing a means of assistance to HCCOA programs and services.﻿

﻿The Store accepts donated items that can be recycled, reconditioned or repurposed for continued use. You'll find everything from household items and furniture to lawn & garden and building supplies.

First Report: The Community Swap Shops that were available at the various recycling centers are now for dropping off items only.

The items dropped will be transported to a retail operation on Highway 90 at the Horry County Solid Waste Authority called The Store where they will be sold and some proceeds will be given to the Horry County Council on Aging. The Store is expected to open in November but the closing of the Swap Shops was effective October 1st.

I spoke with a recycling center attendant that said the Swap Shops had become high maintenance over the years as it was difficult to keep the sheds organized. He did say that he knew some locals were picking up the items and selling them as a way of making some income. He also said the bright side is there will be a couple of new jobs created for people to work on The Store operation. The attendant chose to remain anonymous.

Those looking for more information should contact Rodney Cannon at the Horry County Solid Waste Authority: 843-347-6622.