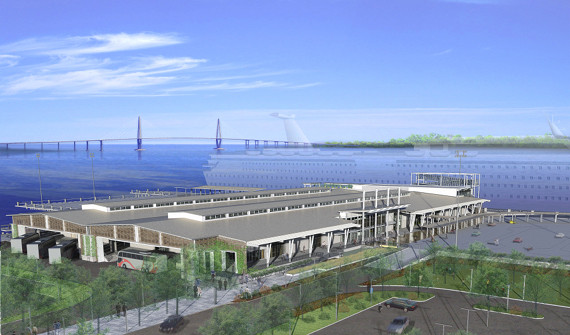 Image by South Carolina State Ports Authority A possible view of Charleston in the not-so-distant future, with a redeveloped waterfront and new cruise terminal.

Update February 13: The Charleston Regional Business Journal reported on Friday that the opening of Charleston’s new cruise terminal has been pushed to mid-2013 because of time added by a voluntary architectural review process.

Update November 10: Plans for the $35 million new cruise ship passenger terminal﻿ won 5-0 approval from the Board of Architectural Review on Wednesday.

If you're surprised by the change in stance, don't be, many pro-cruise events have unfolded in the past weeks: A report highlighted the economic role of cruise ships in Charleston, the Queen Victoria balked at visiting Charleston saying that the old terminal is simply to archaic, a billboard battle continued, and perhaps the king of all of them, pro-cruise Mayor Joe Riley just won his 10th 4-year term and can now apply full pressure without fear of electoral rebuttal.

The reason for deferral was that, despite having high praise for the building's southern facad where passengers enter the terminal and are dropped off﻿, the other three facades should, "should address the city better﻿."

Update August 8: On Wednesday, the State Ports Authority's passenger terminal design will go before Charleston's Board of Architectural Review.

The cruise terminal debate has been going on for months, but this week's meeting is going to be all about architecture and whether the design plans for the terminal are suitable.

The design was created by CH2M Hill, DesignWorks, and LS3P Associates, and it involves the following:

Get more details about the design's particulars over at The Post and Courier's in-depth report here.

﻿Update July 18: The South Carolina Ports Authority revealed the most up-to-date and detailed design of the new $35 million cruise ship terminal at Union Pier to the public this afternoon.

Both Mayor Riley and SPA President and CEO Jim Newsome were on hand at the unveiling. The Post and Courier has a brief; read it here.

Update June 6: The S.C. State Ports Authority has unveiled the first concept renderings for the new cruise terminal and the surrounding property on Union Pier.

The Charleston Regional Business Journal has both a top-down and detailed sketch of the plans posted along with an article explaining the proposed plans for traffic patterns, parking, and the terminal's overall design.

Update April 26: Despite the opposition from downtown neighborhoods, the S.C. State Ports Authority board members voted unanimously in favor of a resolution to approve the plan to move cruise operations to Union Pier.

In addition, the Charleston Regional Business Journal reports that the ports authority plans to give the city more than 35 acres of Union Pier for public and private development once the new cruise facility is built.

The Charleston Regional Business Journal reports that on March 23rd, the association voted 30-8 to endorse the petition created by the Charlestowne Neighborhood Association.

Update March 16: While a contract for the new terminal was approved on Tuesday, new opposition has emerged.

First off, that contract of up to $2.4 million to design a $25 million project was approved — The Post and Courier has details on for what; read about it here.

Second, the South of Broad neighborhood group is spearheading an effort to get the State Ports Authority to move the terminal further north on the peninsula. Present plans call to move the terminal from the south to the north of the Union Pier terminal, but the Charlestowne Neighborhood Association wants it moved further north to the Columbus terminal — one that's presently under heavy use by auto makers.

The Post and Courier has a separate report on that; read it here.

It's such a bold idea that I'd discount it entirely, if it weren't being spearheaded by one of Charleston's richest communities (remember the Global Gateway port that never was?)

Construction on the new cruise terminal site is set to begin this year and open in the third quarter of 2012.

Make your way to the article in today's Post and Courier for the details.

First reporting: Under a new plan, the Charleston cruise terminal would move several blocks north, freeing up prime waterfront land in the heart of the downtown tourist district.

You can see a PDF map of the new layout here.

South Carolina State Ports Authority President and CEO Jim Newsome today provided an update on the cruise industry to the community and announced the next steps for the Union Pier property. According to Newsome, this fall the SCSPA will issue a request for proposals to architects to design a new passenger terminal at the northern end of Union Pier, and the SCSPA has formed a Cruise Neighbors Advisory Council that includes residents from the neighborhoods closest to the terminal.

Joined by City of Charleston Mayor Joe Riley, Newsome presented what he called a “Report to the Community on the Cruise Ship Industry” and noted that the terminal relocation was in response to community input that was an integral part of SCSPA’s planning process during the past year. “This relocation provides numerous benefits,” said Newsome, “including reducing traffic, removing all cargo operations and trains from Union Pier, and – most importantly – making the southern portion of the 63-acre property available for public and other uses.”

Newsome noted that Charleston has welcomed almost 1,000 cruise ships during the past 37 years.  “Cruises are good for Charleston, and good for the port,” he said.  “Cruise ships provide jobs and more than $37 million in annual economic impact.”  He added that about one-third of cruise ship passengers spend at least one night in Charleston, about half visit attractions and patronize local restaurants, and almost all of them say they plan to return to Charleston. “They recognize and appreciate Charleston’s special character, and we are firmly committed to manage our cruise business in a way that protects and preserves that character,” he added.

Newsome reiterated the SCSPA’s commitment to a one-berth one-ship terminal capable of handling ships designed to carry up to 3,500 passengers.  “We see Charleston as being able to accommodate about two ships per week,” he said.  “And, if we see that situation changing, we will consult the community well in advance. After all, it is in our interest to keep Charleston just the way visitors and residents like it.”

According to Newsome, cruise ships are subjected to the strictest environmental standards of all the more than 2,000 ships that annually enter the Charleston harbor.  “There is absolutely no objective evidence of any environmental malfeasance by a cruise ship in our harbor,” he stated.

Newsome said that the greatest benefit of relocating the passenger terminal will be unlocking the southern portion of Union Pier for public and other uses.  Citing the SCSPA’s Concept Plan for Union Pier, Newsome noted some of the potential uses include an appropriate end of Market Street at the harbor, the re-establishment of the historic Custom House wharf, new view corridors, and significant new public access and open spaces.  The SCSPA has already committed to immediate stabilization of the historic Bennett Rice Mill façade within the Union Pier property.

“Quite simply, this is the most important redevelopment opportunity in the Charleston area,” he said.  “And it is entirely dependent upon the relocation of the passenger terminal.  We cannot do one without the other.”

Emphasizing that the passenger terminal relocation is the option preferred by the SCSPA as well as the community, Newsome said that upgrading the existing terminal continues to remain an option.  “If, for any reason, we are unable to move expeditiously on the relocation of the terminal, we will need to revert to the much less desirable option of upgrading our existing terminal,” he said.  “That would mean cargo operations would continue on the property. The entire property would always be used for maritime uses.  And all 63 acres of Union Pier would continue forever to be separated from the rest of the peninsula by a chain link fence.  We think that would be a tragedy.”

Mayor Riley stressed how the plan will serve Charleston. "The City has worked very closely with the Ports Authority throughout this collaborative process.  The resulting Concept Plan is a tremendous opportunity for those that live, work and visit here in Charleston.  But its benefits are contingent on moving the terminal northward.  This would allow cruise to continue to serve as an exceptionally positive force for our economy, while enhancing the quality of life in our city.  It's evident to me that the Ports Authority is committed to the right balance for this community, and this Concept Plan demonstrates that," he said.

“We need now to move forward, designing a new passenger terminal and beginning the process to redevelop Union Pier,” Newsome said.  “We are grateful for the broad-based community participation and support for this initiative, and we look forward to continuing our collaborative work with the City, the community, and our newly formed Cruise Neighbors Advisory Council.  Ongoing updates will be posted on www.UnionPierPlan.com.”