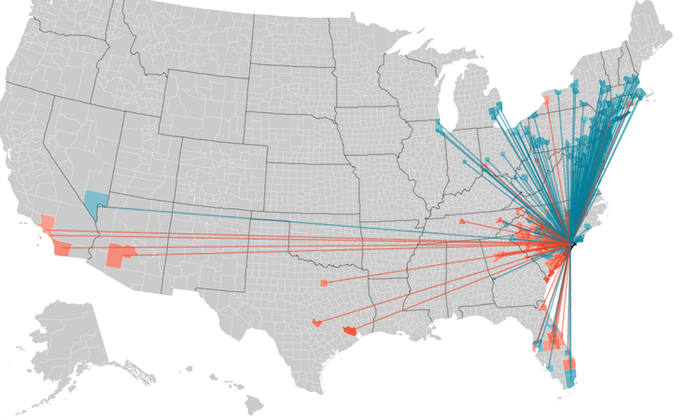 We've covered a lot of 2010 Census﻿ news and related items, but this one might just be the easiest to understand and neatest tool yet.

The American people have always been fairly migrant, moving from state to state and sea to shining sea. According to the Forbes Magazine piece, "Migration in America" there are nearly 40 million Americans that migrate around the country annually.

This mobility makes us efficient seekers of economic improvement—moving into, and then leaving, cities like Phoenix as their fortunes rise and fall.﻿

Horry County has seen around 17,000 Americans migrate to the area around 8,600 leaving annually. However, since the peak at 2005 the migration to Horry County dropped noticeably but the exodus from the area has increased more so. The Forbes' interactive map illustrates those moving to and out of Horry County are inching closer and closer together.

From the looks of it, the majority of those who do move from Horry County relocate to other South Carolina counties where Industry seems to be more of the focus.﻿ However a good portion are also moving further south or out west.

The question is what does all this say about our local economic outlook? We hope it will change for the better with the coming of the iTAP park and the Myrtle Beach Regional Economic Development Corporation.

The interactive map also shows where people are moving to Horry County from and where we are moving to. Hop on over to the Forbes article here, and check out the map here.

For more on the 2010 Census and how its findings are affecting our area make sure to check out our 2010 Census Topic Page.