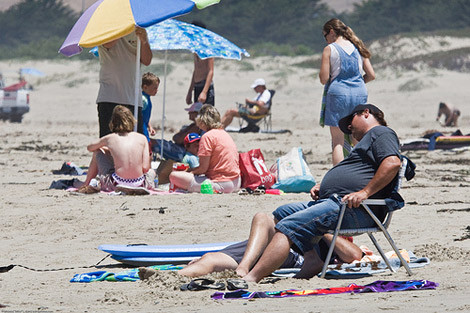 Image by flickr user mikebairdImage by 20080708beach.jpg Authorities are urging you to use a little bit of caution when you go to the beach this summer after several robberies have ruined people's visits.

Misty Jackson of Cross and her boyfriend, Randy Singleton of Ridgeville, were arrested last Friday on charges related to eight robberies at the beach on Isle of Palms. The two were arrested, police say, after use of credit cards taken in the robberies led authorities to the couple. Jackson and Singleton are being held at the Charleston County Detention Center on bond.

(Police Lt. Raymond) Wright said they were caught because stolen credit cards were used about 10 days ago in Mount Pleasant businesses. Police used store surveillance tapes to identify possible suspects and their vehicle, a white pickup truck with a toolbox in the bed.

After the rash of thefts, authorities are urging beachgoers to remain cautious and carry only a limited number of items to the beach. They recommend you avoid taking items such as iPods, jewelry, or wallets.