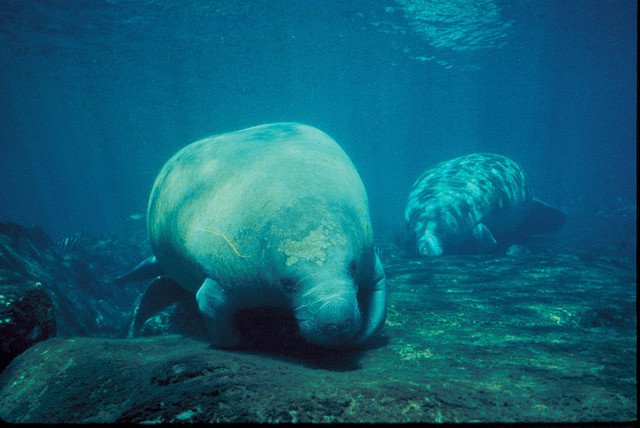 The warm weather is returning, but watch out when you take your boat back out: manatees that are migrating again.

The first manatees have been spotted and the mamals only swim at 3 to 5 miles per hour and have a difficult time dodging boat propellors, and with an estimated population of only 3,000 animals in U.S. waters, manatees, also known as sea cows, are protected as an endangered species under federal and South Carolina law.

Dangers to the species include boat strikes, entanglement in fishing gear and harmful algal blooms known as red tides.

Although Florida manatees are present throughout the year in Florida, they are migratory in South Carolina. Manatees begin their slow migration up the South Carolina coast each spring when water temperatures rise into the upper 60s. They can be found in tidal rivers, estuaries and near-shore marine waters throughout Georgia and the Carolinas throughout the summer months. Manatees return to Florida in September and October as the water temperature cools.

Adult manatees are about 10 feet long and weigh up to 1 ton. Their skin varies from gray to brown, and their bodies are rounded with two pectoral flippers and a wide, flat tail. Subsisting on marsh grass and other aquatic plants, the animals are gentle and pose no threat to humans. It is illegal to hunt, play with or harass manatees, this includes touching, watering or attempting to feed.

Here are some other ways South Carolina residents can help protect manatees:

If a boat accidentally collides with a manatee, the S.C. Department of Natural Resources (DNR) asks that the boater stand-by and immediately contact the U.S. Coast Guard on VHF Channel 16 or DNR at (800) 922-5431. Doing so provides biologists the best chance to help the animal and gather valuable scientific data.

You can also report healthy, livemanatees online at this S.C. DNR website. Please note the date, time, location and number of manatees seen, as well as the coordinates, if possible. Photographs of scars on their backs and tails are especially useful because they can often be used to identify previously known manatees. Report an injured or dead manatee by calling the DNR Hotline at 1-800-922-5431.﻿