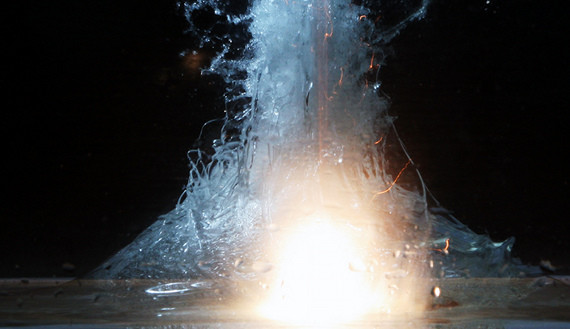 Updated September 8: A possible answer has been found; get connected here.

Update September 7:  A mysterious metal cylinder was found floating in the Charleston Harbor on Sunday afternoon at Sea Breeze Marina.

No formal connection has been made between the rusted metal cylinder and the underwater explosion that occurred on the other side of the peninsula earlier this summer, but hey, you never know.

Authorities are still trying to determine the origin and contents of the rusted hunk of metal. As soon as more details become available, we'll pass along the findings.

For now, you'll have to settle on the brief and single photograph of the mystery object in The Post and Courier.

Update June 10: Still no concrete idea on what happened, but reports are focusing on metal found on the harbor floor which could have been from a pressurized tank.

I'll suggest this article in The Post and Courier for the latest.

Update June 9: After hours of investigation, authorities still have no clue as to what caused the underwater blast and aren't about to speculate on it's origin.

Kind of anti-climactic, I know.

Check out the full update in The Post and Courier.

First reporting: State, federal and local authorities have descended upon the Charleston Harbor to investigate an underwater explosion that took place near the City Marina this afternoon.

Crew members aboard a yacht in the marina said they heard the explosion around 1:45 p.m., saw a large plume of water shooting out of the harbor and saw silt everywhere afterward.

Authorities are asking people to stay away from the area as the investigation continues.

The Post and Courier has a brief posting on the strange event and we'll keep you updated on the the details as they're released.