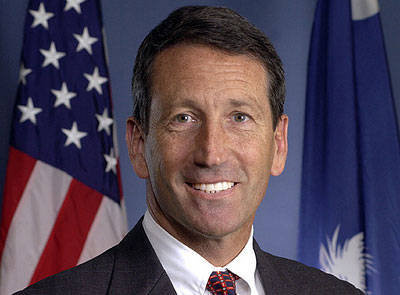 The race for the 1st Congressional District seat vacated by Rep. Tim Scott is continuing to heat up.

And January 18 the opening of filing for the special election hasn't even started.

Heavyweight State Rep. Chip Limehouse of Charleston is saying he's interested, but he's looking likely to not be the biggest name brand in the race: it's looking a lot more like former Gov. Mark Sanford will dive in.

The Weekly Standard’s Michael Warren writes, in part, "Mark Sanford, the former governor of South Carolina, will run for the House of Representatives, sources close to Sanford confirm."

Word is Sanford is eyeing the old Tellis pharmacy on lower King Street as a campaign headquarters.

If that bit of news isn't interesting enough for you, Sanford's ex-wife, Jenny Sanford is still said to be eyeing the same seat.

Filing for the seat ends on January 28 and the GOP primary is slated for March 19. If needed, a primary runoff is due April 2. The special election will follow on May 7.

Update: Mark Sanford is running for the House seat.

The Island Packet out of Hilton Head offers a nice report, Gina Smith writes, in part:

As to his affair that gained national attention, he said: "I failed in that chapter of my life. I spent a year of my life apologizing. At some point, you have to get up and say, 'I am a flawed human being, but I feel I can make a difference based on a 20-year track record.' ... The reality of the human experience is, we're all going to fail at something."

In related news, Sanford's ex-wife, Jenny, has said she won't run for the seat.