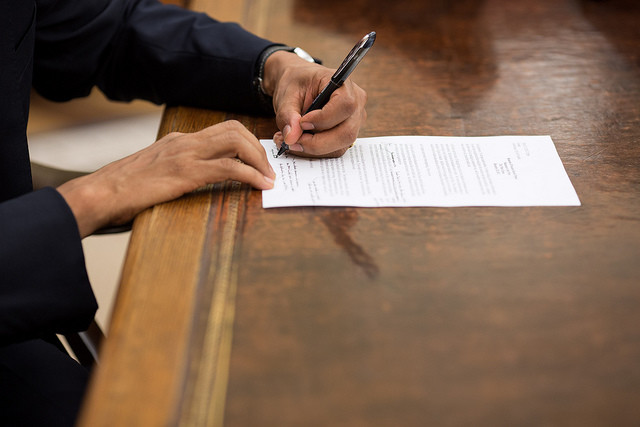 Yet another bill is being introduced in South Carolina with the aim to override what might come down from the federal goverment. This one sets executive orders in its sights.

Earlier this month we reported on a bill that would criminalize those who try and enforce the healthcare law, and last week there was news of a bill that "declares that any firearms made and retained in-state are beyond the authority of Congress under its constitutional power to regulate commerce among the states." And now there is another questionably legal bill being pushed around Columbia.

The bill in question is S. 224 that was introduced on Tuesday, January 15th by Senators Davis, Martin and Verdin. The bill states:

"Any federal executive order restricting, abridging, or otherwise infringing upon the free exercise of a citizen’s second amendment right to keep and bear arms is unconstitutional and shall not be enforced by any federal, state, or local law enforcement agency within South Carolina.”

Tenth Amendment Center has one of the only articles on the subject (as of now).

In 1989, then President George H.W. Bush issued an executive order halting the importation of some semi-automatic firearms after a mass school shooting Stockton, California. He based his executive order on the 1968 Gun Control Act and used it to ban the shipment of what could be considered “assault weapons” unless they were used for sporting purposes. (Question: Did the free republic cease to exist then?)

In 1998, then President Bill Clinton also issued an executive order to ban the importation of more than 50 semiautomatic “assault weapons” that had been modified to get through that “sporting purposes” exemption.

In 2001, Clinton moved again via executive order, banning the importation of assault pistols.

The executive order(s) issued by President Obama is in no way a "gun grab". Here are the 23 orders:

3. Improve incentives for states to share information with the background check system.

4. Direct the Attorney General to review categories of individuals prohibited from having a gun to make sure dangerous people are not slipping through the cracks.

5. Propose rule-making to give law enforcement the ability to run a full background check on an individual before returning a seized gun.

6. Publish a letter from ATF to federally licensed gun dealers providing guidance on how to run background checks for private sellers.

10. Release a DOJ report analyzing information on lost and stolen guns and make it widely available to law enforcement.

14. Issue a Presidential Memorandum directing the Centers for Disease Control to research the causes and prevention of gun violence.

15. Direct the Attorney General to issue a report on the availability and most effective use of new gun safety technologies and challenge the private sector to develop innovative technologies.

16. Clarify that the Affordable Care Act does not prohibit doctors asking their patients about guns in their homes.

17. Release a letter to health care providers clarifying that no federal law prohibits them from reporting threats of violence to law enforcement authorities.

20. Release a letter to state health officials clarifying the scope of mental health services that Medicaid plans must cover.

23. Launch a national dialogue led by Secretaries Sebelius and Duncan on mental health.