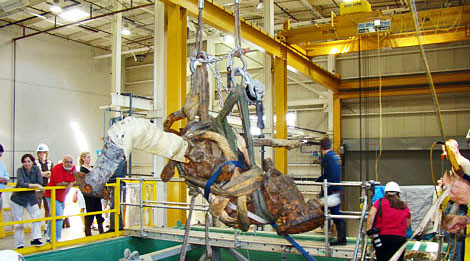 7:21 am on Friday May 23, 2008 | Posted by
Hunley closer to conservation after ballast pump removed

Image by Friends of the HunleyImage by hunley.jpg The forward pump being carefully lifted from the Hunley’s conservation tank.

The Civil War-era Confederate submarine Hunley had its forward ballast pump removed Thursday, the last major piece that needed to be taken out before the restoration process can begin. It will still take a few years of work, though, before the conservation is complete. Brian Hicks of The Post and Courier writes:

On Thursday, scientists took out the Civil War-era submarine's forward ballast pump, the last major piece they needed to remove before they can begin the conservation process. It sounds easier than it was.

Just to detach the pump, they had to drop a keel block that probably weighed 500 pounds. Then, workers had to maneuver the oddly shaped piece past the sub's steering stick, diving plane axle and one of the sub's supporting ribs.

Besides the need to remove the pump for conservation purposes, scientists hope the pump can offer some valuable information about what was happening when the Hunley sank, among other things.