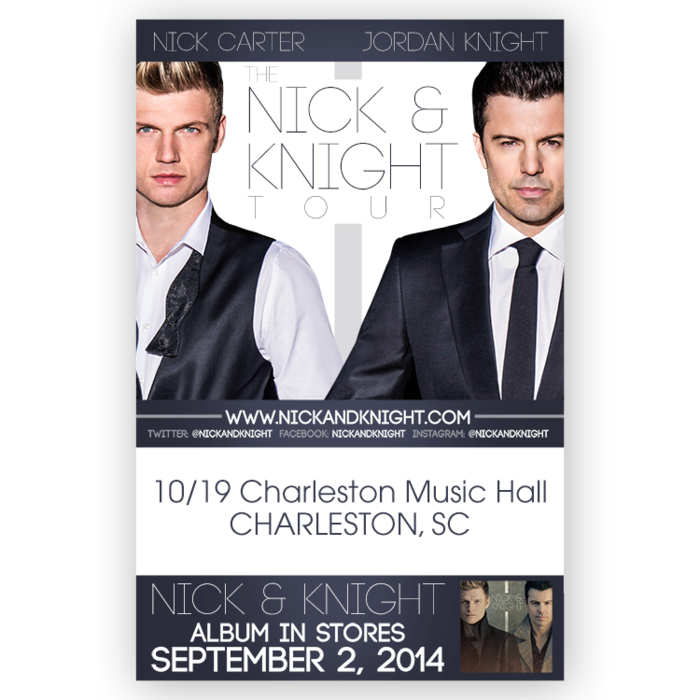 Teases Fans with New Song “Just the Two of Us,” Available Today for Immediate Download with Album Pre-Order

Duo Will Kick Off National Headlining Tour Across Major Cities
on September 15th in Nashville, TN; Tickets Available May 2nd for Pre-Sale

(April 30, 2014) Mega boy band singer-songwriters Nick Carter from Backstreet Boys and Jordan Knight from New Kids on The Block announced today the release of a collaborative album titled ‘Nick & Knight.’ To help kick things off, fans will be able to get a sneak peak of ‘Nick & Knight’ with the immediate download of their new song titled ‘Just the Two of Us’ when they pre-order the album, available today.

Fans will also be able to purchase pre-sale & VIP tickets for their national headlining tour, which kicks off on September 15th in Nashville, TN on May 2nd at 10am with general tickets available on May 3rd. Both pre-order and pre-sale can be done through their official website http://nickandknight.com.

With plans to release an official first single this summer, hitmakers Jeremy Skaller, J Kash & Nate Campany, The Stereotypes, Mario Marchetti and Halatrax among others have lent their talents to the ‘Nick & Knight’s’ project.

Nick Carter is the blonde haired, blue eyed, breakout star of world-renowned singing group, Backstreet Boys, one of the highest selling bands in history. An internationally acclaimed singer and songwriter, Nick has won fans over with his musical and on screen talents, as well as his undeniable heartthrob status. Starting his career as the youngest member of the Backstreet Boys at the tender age of twelve, Carter has toured the world with the group for the last 14 years. Selling over 80 million records worldwide to date, the band has earned five Grammy nominations and countless Billboard, MTV Video, American Music, RIAA, People’s Choice and other awards. In 2001 the group was labeled the highest paid live entertainers when they grossed over $350 million in ticket sales. In 1999 Backstreet solidified one of the largest record deals ever, signing a deal for $60 million with Jive. From 1992 until today, the Backstreet Boys have toured around the world several times over, released six albums and broken several records. Selling over 80 million records worldwide is an incredible accomplishment and they hold the record for selling the most albums in one week with 5 million. Carter has been ranked #1 on the list of Teen Scene Magazine’s “Hottest Under 21,” Teen People named him “The Biggest Teen Idol” in 2000, E! Online has

described him as the most gorgeous celebrity on the planet and in 2000 he was voted one of People Magazines “50 Most Beautiful People.” In 2002 he released his debut solo album, Now or Never, which was certified gold. In 2004 he starred in a horror film called, The Hollow, which was a remake of the classic Sleepy Hollow. Carter is currently gearing up for the summer VH1 premiere of his new docu-series “I ‘Heart’ Nick Carter” which focuses on him and his fiancée’s path to saying ‘I Do.’

Most recognized as the lead singer of New Kids on The Block, Jordan Knight was first introduced to fans through the group’s self-titled, debut album release in 1986. As a songwriter, he wrote his first Billboard Hot 100 #1 hit song “I’ll Be Your Everything” at the age of 17 for singer Tommy Page, which remained on the charts for 14 weeks and became RIAA certified gold. After selling over 80 million albums worldwide through the release of 6 group albums, Knight broke from NKOTB to embark on a successful solo career, which produced 4 Top 40 singles. His critically acclaimed debut self-titled album release in 1999 became RIAA certified gold and produced the Billboard Top 10 single, “Give It To You” which sold over a million copies and was nominated for Best Dance Video at the MTV Video Music Awards. Much to the delight of their loyal fans, Knight and NKOTB reunited in 2007, returning to the charts once again with “The Block,” the group’s first studio album in 14 years. With the album debuting at #1 on the Billboard Pop Album chart and #2 on the overall Top 200 chart, the group promoted their new release through a sold-out, 48-city worldwide tour. In 2011, Knight released his first solo effort in 6 years with the release of his highly successful independent album “Unfinished” which coincided with a national sold- out tour.