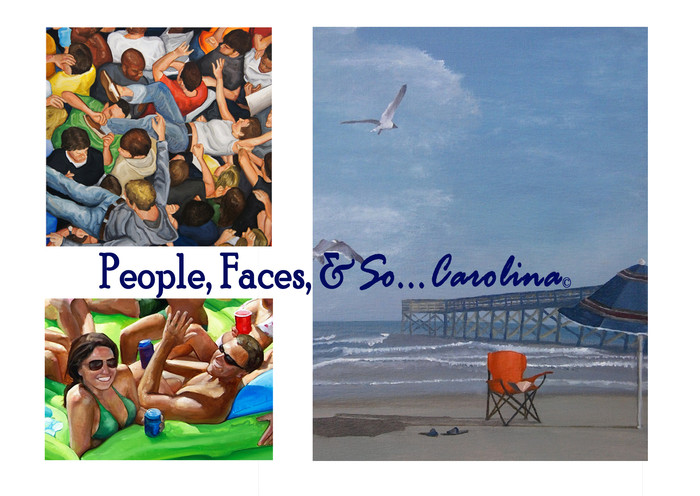 The City of North Charleston’s Cultural Arts Department is pleased to announce that People, Faces, and So…Carolina©, an exhibition of oil paintings by Richard and Joel Parker, will be on exhibit at the North Charleston City Gallery from July 1-29, 2013. The artists will host a free public reception at the gallery on Friday, July 5, from 5:00-7:00pm.

People, Faces, and So…Carolina©is a joint exhibition featuring works from Richard Parker’s So…Carolina© Low Country series and Joel Parker’s Facebook It! series. The exhibition marks the first time the two artists, who are father and son, will have their work displayed together. Richard’s oil paintings of Low Country scenes, from the sun rising over the beach at Isle of Palms to the storefront of the old Tellis Pharmacy on Lower King Street, are rooted in the aesthetic of reflection and the artist’s spiritual values. In contrast, Joel’s selection of oil paintings from his Facebook It! series explore the idea of spectacle by presenting images of large crowds at social gatherings. Instead of depicting the event the crowd has gathered for, Joel chooses to focus on the interactions that support these large events, thus turning the audience assembled to watch the spectacle into the subject observed by the viewer. By presenting a crowd in this manner, the viewer is asked to consider how an audience participates in a spectacle while at the same time mirroring how the viewer of the artwork participates with the artwork.

Richard Parker was born in Camden, SC, and raised in Kershaw, SC. Since high school he had dreams of an art related career, studying art at the University of South Carolina at 19 and later, with the help of the G.I. bill, receiving a BS in Art with K-12 certification from James Madison University. However, his aptitude for mathematics landed him in the field of civil engineering and project management with positions in the military, civilian industry, and institutes of higher education until his retirement in 2007. It is now, in retirement, that he is able to pursue his first career desire as his second living in his home studio in Mt. Pleasant, SC.

Joel Parker received his Bachelors of Arts inStudio Art, Historic Preservation, and Art History from the College of Charleston in 2005 and 2006. He received his Master of Fine Arts in painting from Washington University in St. Louis in 2009, followed by a travel fellowship and Cité Residency at the Cité International des Arts in Paris, France. His work has been featured in a number of solo and group exhibitions in Charleston, SC, St. Louis, MO, and Gainseville, FL, where he currently resides and is pursuing a Masters in Art History at the University of Florida.

The North Charleston City Gallery is situated in the common areas of the Charleston Area Convention Center, located at 5001 Coliseum Drive in North Charleston. Parking and admission are free during regular Convention Center operating hours, 9:00am – 5:00pm daily.  The gallery is staffed on Friday, Saturday, and Monday only.   Inquiries regarding the artists or purchase information may be directed to the North Charleston Cultural Arts Department at (843) 740-5854. For information on additional exhibits, programs, and events, visit the Cultural Arts section of the City’s website at http://bit.ly/culturalarts.

Head to the source at northcharleston.org
Advertisement