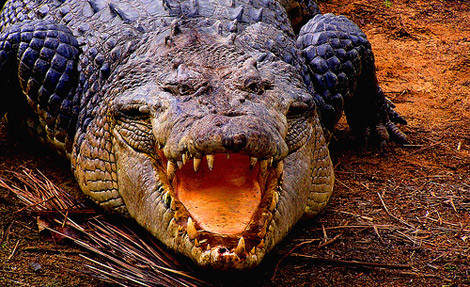 Image by flickr user WhotheheckareyouImage by crocodile.jpg Not the croc in question, but you can see why you wouldn't want to run into one of these guys in a dark alley.

A crocodile that washed up on the Isle of Palms recently was sent back to Florida on Wednesday. The reptile will join Gatorama, a wildlife education center in Palmdale, Fla. And it wasn't easy getting him on the truck, either, as The Post and Courier reports:

The legs of the 6-foot croc were cut free of hog ties, and it thrashed once, knocking three handlers off balance a moment. They wrestled it into a barred shipping crate in the bed of a pickup truck, with thick black tape wrapped snugly around its snout. Once in the crate, it settled down and stared through the blade-like slits of its eyes.

The toothy reptile was snared near the Charleston County park pier after spending at least one winter in a Mount Pleasant pond.

It's uncertain exactly where the croc came from or how it ended up in the Lowcountry. But Live 5 News reports:

A sample of the crocodile's DNA will be taken to see if they can figure out where it came from. There is a possibility that it could have been bred at the very facility it is now returning to.