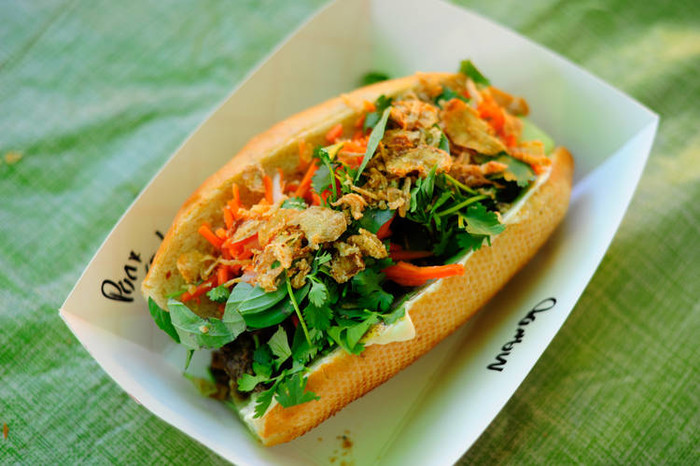 When you try a perfect food there is no return to sanity until you have satisfied all cravings. I don't remember the first food I obsessed over but I do know that bánh mì was definitly one of those foods. I tried my first and I just could not get it out of my head. Then I had to have another, and another, and when I couldn't get another... I had to get my hands dirty and make it myself. There is something about the fluffy bread, the crisp crunchy crust, the bright color of green herbs and cucumbers, the pillowy, creamy richness of the pate, the tang of the fish sauce, the last juicy bite where the the pickled veggie liquid has soaked into the baguette. Nothing compares.

Thats how it was for Jason Sakran of Street Hero and Bon Bánh Mì. Like me, Jason was introduced to bánh mì on the streets of Washington, D.C. and Northern Virginia. While living in the area he would explore the ethnic food scene at lunchtime. When he moved to Charleston without a bánh mì in sight, he was despondent.

One afternoon Jason had an “overwhelming hankering” for a bánh mì and decided to experiment. He did some research and made a test sandwich similar to the 5-Spiced Ground Pork, currently on the menu. The sandwich was a hit with his wife and his best friend, now business partner Jeremy Spencer.

Months later Jason and Jeremy decided to test the chutzpah of these tasty treats by selling them at a few music concerts. After a particularly successful Phish show, Jason somehow convinced Jeremy to open the Street Hero stall at the Marion Square Farmer's Market in Spring of 2011.

One year later bánh mì seem to be everywhere in Charleston. Jeremy and Jason appreciate the competition. They feel that "as people get turned onto the sandwich it's only going to help us. We offered the bánh mì at the right time in Charleston, people are embracing it." At Bon Bánh Mì, and Street Hero they want to “offer the sandwich for the masses” while using organic, antibiotic free and local ingredients wherever possible. The baguettes are made fresh locally, the eggs are locally sourced and the pâté comes from Jason Houser of Meathouse (also available at the Marion Square Farmer’s Market).

Jeremy and Jason opened their 400 sq. ft. space on Spring Street on July 28th. The new moniker Bon Bánh mì pays homage to the French origin of the sandwich (Bon meaning “good” in French). They will be expanding the menu from what is currently offered at Street Hero. The Spring Street location has added a salad option for those seeking more ruffage, and a pulled red-curry short rib to the 'fixin' list. They are expecting to offer a shrimp and a fresh local fish option in the future. Jason says experimentation has begun on some side dishes and a dessert that is certain to blow your mind. I’m not releasing details, but you should definitely keep an eye out. Beverages choices include $4.50 beers or $5 glasses of wine and their Homemade Iced Black Jasmine Tea. Eventually the menu will include Café Su Da (Vietnamese coffee) and Bubble Tea.

The Spring Street location has been packed every afternoon. With only about 10 seats the guys are counting on delivery and take-out for a majority of the business. I suggest you get in and get your fix before the lines begin to wind out the door. But if you can't make it over to Spring Street the Street Hero stall will continue operating Saturdays at Marion Square.

Head to the source at goodforthepalate.com