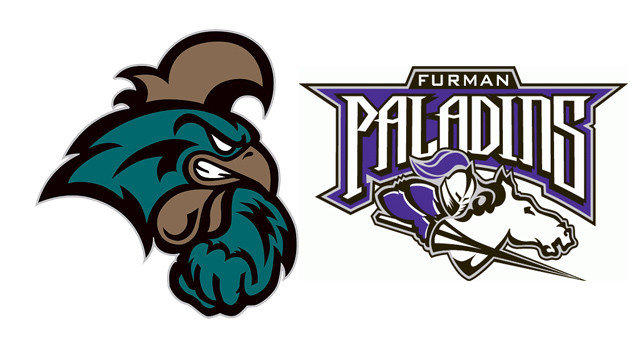 It took the Coastal Carolina Chanticleers (2-0) four quarters and three thrilling overtime periods to knock off the Furman Paladins (0-2) by a score of 47-45.

The Paladins’ home opener against the Chanticleers was delayed due to lighting just prior to the scheduled start. The official kickoff came at 5:13 p.m. and the Chanticleers wasted no time in their fourth meeting against the Paladins. Aramis Hillary capped off a 12 play, 79-yard drive with a one-yard rush to put his team up early. Alex Catron tacked on a 38-yard field goal to take an early 10-0 lead.

Furman slowed the Chanticleers down early in the second quarter when Mitch McGrath picked off Hillary. McGrath’s interception ended up leading to a 41-yard field goal by Ray Early to pull Furman within four points.

Conway native Dakota Derrick had to come out of the game due to a huge hit by Mike McClure late in the second quarter. True freshman quarterback, Reese Hannon was called upon and almost pulled off a miraculous comeback. In his first collegiate action, Hannon threw for 255-yards with four touchdowns, three of which came in the fourth quarter.

After a 21-yard Furman touchdown pass from Hannon to Snellings, junior linebacker Mike McClure stepped up and intercepted the two-point conversion pass and brought the ball back 100-yards for two points. This was the longest play in Coastal Carolina history knocking off Mike Tolbert’s 86-yard rush versus VMI in 2007.

The Paladins took their first lead of the game as Hannon hooked up with Ryan Culbreath, capping off a 50-yard nine play drive. This left only 40 seconds on the clock for Aramis and the Chanticleers offense. He managed to bring the Chants down to the 35-yard line, leaving just enough time on the clock for junior Alex Catron to nail the equalizer.

The Chanticleers and Paladins slugged it out in the first two overtime periods each exchanging a pair of touchdowns. Coastal started off with the ball in the third overtime and the offense stayed hot. Aramis connected with his former Gamecock teammate, DeMario Bennett on a 26-yard touchdown pass. Bennett also tacked on the two-point conversion with a two-yard run. The Paladins quickly answered with a touchdown of their own, but their two-point conversion came up unsuccessful.

After the game the Chanticleer Sports Network caught up with Coach Joe Moglia, “It takes a lot of character, to have a team drive on you at the end of the game the way Furman did, you have to give them a lot of credit and for us to come back with 50-something seconds left and not only tie it but ultimately win it, I was proud of the guys.”

Hillary had another career game through the air with 292-yards and two touchdowns, while completing 20 of 27 passing attempts.

Lorenzo Taliaferro came up big with 55-yards on 13 attempts and a touchdown in his first game as a Chanticleer.

Matt Hazel was the clear star of the game as he brought in 7 receptions for 128-yards and one touchdown.

The Chanticleers will be back home next Saturday to take on the Eastern Kentucky Colonels at 6:00 PM.