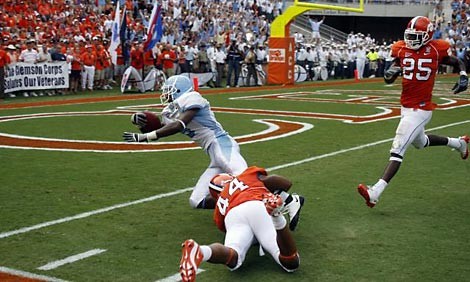 The once ninth-ranked Clemson Tigers bought a tiny bit of redemption from last week's humbling when they toppled the The Citadel 45-17, Clemson Head Coach Tommy Bowden said:
We established a running game this week after having a poor performance last week. The players did well from the beginning. We turned it over early, but rebounded and hopefully we will learn from it.

The State generally seems to agree with that feeling:
The Tigers’ 28-point winning margin might be classified as average, but players and coaches were unified in how important it was to have an authoritative showing in the wake of an embarrassing 34-10 defeat to Alabama.

Clemson’s defense yielded 427 total yards, including 229 first-half passing yards. Davis and receiver Tyler Grisham lost fumbles inside the Bulldogs’ 20, and the Tigers avoided a tighter first half when The Citadel was unable to get any points out of three trips inside Clemson’s 31.

The win brings Clemson's streak against teams in the Football Championship Subdivision to 21-0.

For more on the game, I'd suggest The State for their story, photo gallery, and video.

For a write-up of the game from The Citadel's perspective, head over to CitadelSports.com. Get a Clemson perspective at Clemson. You can get game stats, quotes and photos at both of those site, too.

Clemson plays next week against North Carolina State, who USC thoroughly trounced a week ago.

The Citadel's next game is home against Princeton, but is two weeks away.