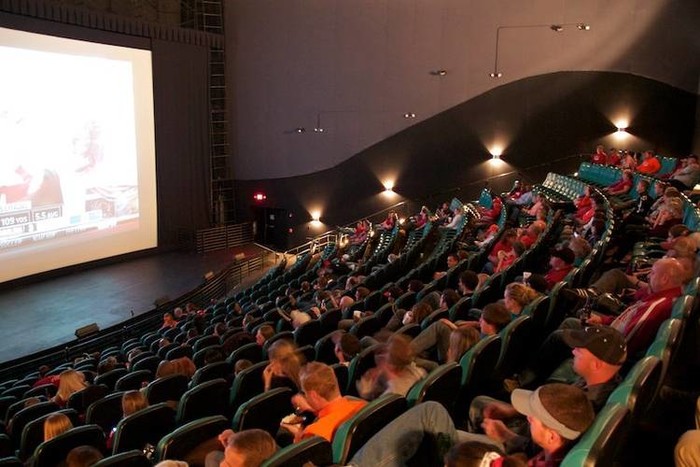 5:56 am on Wednesday November 30, 2011 | Posted by EmilyTrogdon
PALMETTO MOON TREATS HUNDREDS OF CUSTOMERS TO CLEMSON-CAROLINA VIEWING PARTY ON SATURDAY, NOV. 26

Whitney Holzer, Co-Owner of Palmetto Moon, announced that the company hosted its first ever Rivalry Rumble viewing party for the Clemson University vs. University of South Carolina football game on Saturday, Nov. 26 at the Charleston Hippodrome Widescreen Cinema. Hundreds of football fans watched the game on the 75-foot-widescreen with free food provided by Sticky Fingers. Clemson and Carolina fans raised nearly $700 during a fan face-off benefitting Pattison’s Academy, an organization committed to helping children of the Lowcountry with disabilities. Palmetto Moon matched the proceeds and donated a total $1,400 to the charitable organization.

The Rivalry Rumble crowd was filled with Palmetto Moon winners from several contests that the company held prior to the game. Winners were determined through a Palmetto Moon Facebook contest, where Clemson and Carolina fans uploaded photos that represented why they were diehard fans. Palmetto Moon also partnered with 105.5 The Bridge and WCBD News Channel 2, which held on-air television and radio contests. The company also awarded some winners with party packs to include groups ranging from four to twelve people.

Along with winning the game on Saturday, South Carolina fans won the fan face-off contest to raise the most money for Pattison’s Academy. This organization is dedicated to help children with severe and multiple disabilities through Pattison’s Therapeutic Summer Camp and educational and medical programs.

“This event really represented what South Carolina is all about: friends, family, food and football. The Rivalry Rumble was designed to show our great appreciation for our customers,” said Holzer. “We also want to thank the Charleston Hippodrome and Sticky Fingers for the food and venue. It truly made the event memorable.”

For more information about the Palmetto Moon, visit www.palmettomoononline.com.

Head to the source at palmettomoononline.com