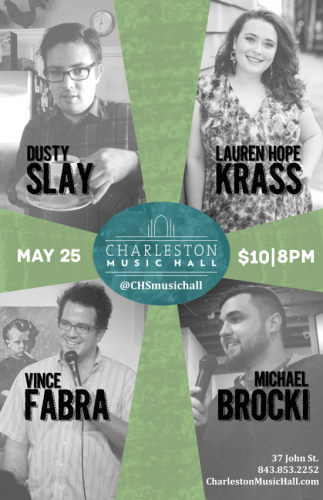 And he's BAAAAACCCCKKK!!!!! Charleston's funniest funny guy Dusty Slay is returning from Nashville for a one time only performance. Do not miss your last chance to see him light up the stage with his hand-picked crew of comics.

Lauren Hope Krass started her comedy career in early 2012 and has since taken the local comedy scene by storm with her personal brand of charming and self-deprecating humor. She received 3rd place in the Charleston Comedy Festival’s Standup Competition in 2012 and 2013 as well as 1st place in the Corona Dave Ugly Put Your Money Where Your Mouth Is Standup competition in January of 2014. She has performed in The She Devil Comedy Festival in New York, The Annapolis Comedy Festival, The Charleston Comedy Festival, as well as Jailbreak Art Festival. She was a featured storyteller on Kevin Allison’s RISK! as a part of Piccolo Fringe in 2013. In addition to standup comedy, Lauren is acompany member at Theatre 99 where she regularly performs improv comedy. Her most recent project is her one woman musical entitled “Princess Charming” directed by John R Brennen of the off Broadway Banana Monologues. Come see Lauren in her Music Hall debut before she skips off to NYC! Find her on Twitter @laurenkrass

“Vince Fabra is the greatest comedian of all time,” – Vince’s mom. Vince Fabra, a native of New Orleans, has been working on his comedic craft in Charleston since 2010. Vince has performed all over the country and brings a relatable perspective and sense of humor to each audience he meets. Vince was a semi-finalist in Charleston’s Stand-Up competition in 2011, co-creator of the sketch group Peanut Butter Buddy Time, co-writer of the acclaimed sketch show The Importance of Being Awkward, and now he wants to be your friend. Find him on twitter @vincefabra.

Michael Brocki came to Charleston last Fall by following his comedy spirit guide, who told him there were a lot of women in Charleston.  He has made an impressive impact in the short amount of time, already having performed in local spots like Theatre 99, the Jail Break arts festival and every bar and coffee shop in between.  His comedy has been described as “hauntingly beautiful” and “soulful” by his self, while audiences would describe it as hilarious.