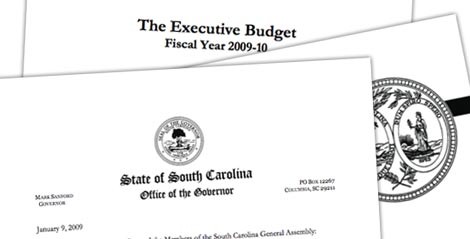 South Carolina Governor Mark Sanford has proposed a $5.8 billion state budget that aims to get more money to K-12 classrooms and medical services, while squeezing money from the rest of the state.

There's a couple of write-ups out there, but I like The State's more.

Here's what they say, in part:
State schools would see a slight bump in current funding, but the state Department of Education would be forced to lay off 94 employees, or 20 percent of its administrative staff. The plan would close three two-year University of South Carolina campuses in Allendale, Lancaster and Union counties.

Sanford’s budget balances new spending with $278 million in savings and cuts. The plan would spend about $100 million more than the current budget, which has been slashed by $1 billion since July. Sanford’s budget for the year beginning July 1 is roughly equal to state spending in 2005-06.

To meet those savings, lawmakers would need to merge state agencies with similar missions, consolidate small school districts and require colleges and technical schools to share administration. Sanford has pushed for the changes for years but lawmakers have rejected the idea.

It's a pretty bold, and thorough plan: You can read the full 300-page report on Sanford's Web site (there's also a boiled-down fact sheet).

But, in years past, Sanford's big plans have been largely ignored by our Legislature.

The Post and Courier has some details on local agencies that would face cuts, like a $2.1 million cut in advertising funds at The Citadel.

Expect more news next week about how much of the plan is being adopted by our lawmakers.

I see things I like and don't like in the plan, but I just hope whatever plan comes out at the end of this process is coherent and directed towards some sort of goal.