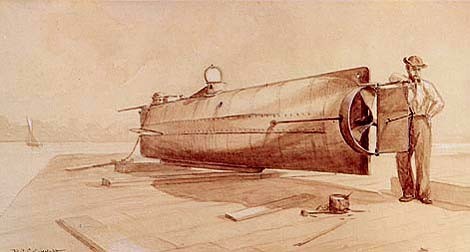 9:48 am on Sunday October 19, 2008 | Posted by Ken Hawkins
Discovery says Hunley might not have sunk as we thought

A recently removed pump on the Hunley seems to lend evidence that the commonly held picture of the crew's last moments might be wrong.

The thinking used to be that the submarine had filled with cold water that the crew could not or was not capable of pumping back out.

Read more stories on this subject in our Hunley topic page.Well, the bilge pump that would have been used to try to empty the sub of water appears to have been in the "off" position.

The chairman of the South Carolina Hunley Commission said, "It now really starts to point to a lack of oxygen making [the crew] unconscious. They may have been cranking and moving and it was a miscalculation as to how much oxygen they had."

Tired and exhausted, the crew might have put the sub down to wait for a favorable tide before working back to land. But it seems they could simply have waited to long to resurface, running out of air.

But that is, of course, all an extrapolation off one piece of evidence.

Hop over to The Post and Courier for the best coverage on this story.