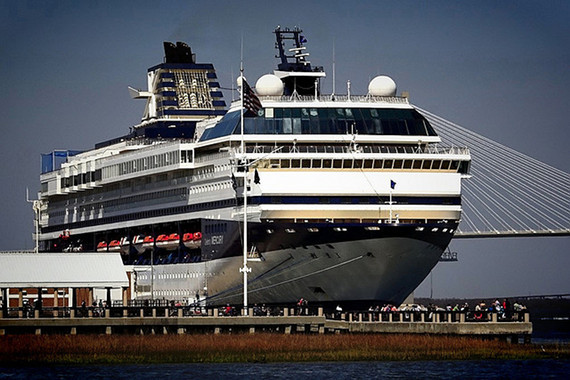 The South Carolina State Ports Authority (SCSPA) kicked off the Union Pier Cruise Terminal design process with a public meeting on Tuesday, the first of several opportunities for the public to provide its input on the design of the $25-million project.

“Cruise ships have been an integral part of our maritime activities for more than three decades,” said Jim Newsome, president and CEO of the SCSPA. “In fact, cruise ships are responsible for hundreds of jobs and an annual economic impact of more than 37 million dollars.”

“As important as the cruise industry is to Charleston’s economy, we have been serving it in a facility that is clearly out-of-date and not contextual with its historic location,” said Newsome.

Led by the SCSPA and the design team, the Kickoff Meeting reviewed the Union Pier Concept Plan, which was informed heavily by extensive public input. The design team, led by CH2MHill, along with local partners LS3P Associates Ltd., Collins Engineers, Thomas & Hutton and DesignWorks, shared specific cruise terminal facility considerations that must be included in the design. Breakout sessions were then held to allow the public to provide specific input and comments.

Thom Penney of local architecture firm LS3P stated that the new terminal will serve as a “doorway to Charleston for guests from around the world” and highlighted the opportunity for excellence in design, functionality and context with this planning process. The design process will include two additional public meetings in upcoming weeks. In June, preliminary designs will be presented, taking into consideration public input and providing opportunities for additional comments. The design will be refined and shared with the community and plans developed to prepare for the renovations.

The design team will be converting an existing structure located at the northern end of the SCSPA’s Union Pier property into a new cruise passenger terminal. It will replace the present passenger terminal, built almost 40 years ago farther south on the property. The hundreds of local residents and business owners that attended the public meeting provided input directly to design team members during breakout sessions, where participants discussed the look of the new terminal as well as parking and traffic considerations. Many also wanted the team to consider how the terminal can be used for events for the public while ships are not at dock.

Relocating the cruise terminal north on the Union Pier property is the essential catalyst to realizing the Concept Plan for Union Pier, a plan that shifts more than 180 cargo ships a year to other facilities, reduces rail traffic and removes tracks, improves traffic flow in and around the terminal, and creates new opportunities for the property, including green spaces, a restored natural shoreline and public access to the waterfront.

Conversion of the existing building is slated to begin in fourth quarter 2011, with the new terminal facility opening in late 2012. Following that, the SCSPA will be able to turn attention to the rest of the Union Pier property.

The public is encouraged to submit feedback and comments throughout the design process. Created with extensive public involvement, the Union Pier Concept Plan can be seen at www.UnionPierPlan.com, where public input can also be submitted.