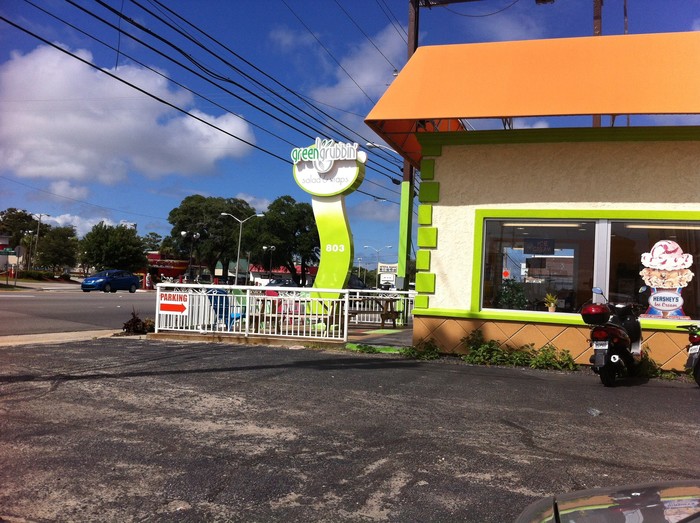 I'm not a fast food person, but have to admit every now and then it would really put a smile on my face if I could pull up to a speaker board filled with pretty pictures of food (which never quite look like that in person) and order something fresh and delicious. I've lived other places where that dream is being lived by others, but alas, here in Myrtle Beach, it is not..........yet! (said the Eternal Optimist).

Remember when Fruitti's came to town last year? Over there across from Donut Man on Business 17? Well, at the same time they also opened a smaller location just South on Business 17 right around 8th Ave. South.   The smaller location was easy to spot when the Fruitt's sign was up, but now that Green Grubbin' has been leasing the space; their sign doesn't POP and so it's quite easy to drive by. Your only hope of catching site of it is if you're stuck in bumper-to-bumper traffic. After two visits there this season, I would say it is well worth the effort to search it out!

All menu items are made right before your eyes. It's not made ahead and shrink wrapped. At first I balked at paying $7.99 for a "wrap", but it wasn't until I realized that it wasn't one of those measely offerings sold at other restaurants that I "settled down" and forked over the cash.   My first choice was the Greek Grubbin' on a honey wheat wrap. I chose the recommended Tzakziki dressing which absolutely took it over the top of delicious!

The staff is helpful and knowledgeble and all of that, but the odd thing to me is this: I found it interesting that they also sell ice cream.  Here is this healthy eating joint where the whole display case is nothing but ice cream. Granted it is a big freezer space that they probably had to utilize since produce doesn't do well in that environment.  I can definitely see the utility of it. I guess they could just unplug it, but then again we are at the Beach and I suppose you have to give the people what they want. Of course, ice cream is sold just about everywhere.  No matter where I go there always seems to be a display case with ice cream near the check out. I get it. But maybe to keep with the theme and the motif of Healthy Eats, they could give those of us who want to make more healthy choices some sort of alternative to the ho hum ice cream choices which we can get anywhere.  And it's Hershey's Ice Cream to boot! I find that a bit humorous. I don't know why I do...I just do.

Most vegetarians will go ahead and eat milk and other similar products, but vegans will not. I'm sure it's difficult to find a distributor that sells soy or alternatives to milk and cream, such as almond and coconut milk tasty delights, but hopefully it is something they are contemplating.   It's easy for me to sit here....armed with my laptop.....making suggestions left and right, but quite another to implement those ideas.   Good luck to Green Grubbin'

Every time I've been, it's been delicious. I wondered why they had ice cream too. They should get rid of the ice cream and keep with the healthy thing they have going.

Hey bashful birdie....thanks for "chirping" in........I, of course, am mostly just poking fun, but it does remind me of working at McDonald's when I was in High School....way back in the late 70's. People would order a Big Mac (or two) and fries and then...to cut the calories.....they'd order a TAB (diet drink). I think of that when I see all the ice cream in front of your face as you wait for the "healthy" food. It's like....what's wrong with this picture? Really though....it's not a big deal at all. Have a great day!