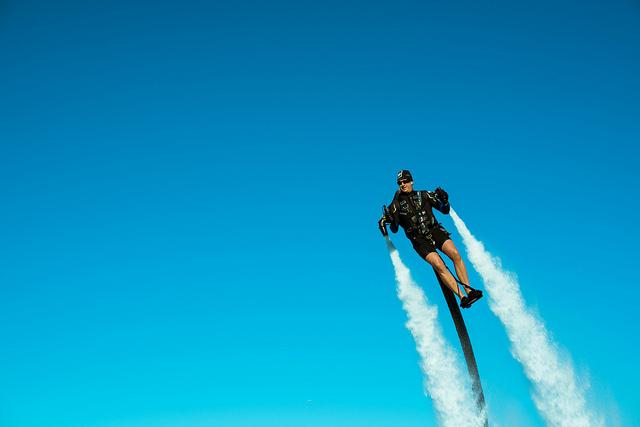 Flickr user: chase_elliott
8:34 am on Tuesday May 28, 2013 | Posted by Casey_Grim
New thrill ride in Myrtle Beach lets you ‘fly’ over water (Update: City Council will not to challenge use of Jetpacks)

Update 5/29/2013:  Myrtle Beach City Council Tuesday night decided against altering city codes that deal with water-sport operation. The issue was placed on the agenda by request of councilman Wayne Gray who said that he believed that the current laws did not allow Myrtle Beach Jetpack Adventure to operate within the city limits. Jetpack Adventures is a part Downwind Sails, which has been in business since 1982. “Frankly, my opinion is the way the language is drafted, only three things are allowed,”Grey said “Jet skis, banana boats and parasailing. I don’t think the language allows it to be interpreted liberally.”

According to current code allows only businesses that were in operation when the law took effect in 2011 may continue with their current water-sport activities. parasailing, operating jet skis, motor boats and banana boats are the only activities mentioned in the code.

Original Story: Think of this your hovering 10 feet above water and twirling in the air and all done by the powerful force of water kind like modern day Jetsons or even Iron Man, but without all the cool superhero gadgets.

According to Shane Bull who is the owner-operator of Myrtle Beach Jetpack Adventures who started offering the ride a few weeks ago as part of another business Downwind Sails which is located at 29th Avenue South in Myrtle Beach:

This is brand new and every time we crank it up, people come running. It is just such eye candy.

Watch a demostration of the ride by clicking this link